Why you need to camp by a West Australian salt lake

With a couple of sunny days forecast before the drenching rain so craved by the local farmers, we decided to head out and camp a night on a friend’s pastoral lease land. We’d seen him at the Pub a few nights earlier and he gave us the thumbs up to use his property. Lucky us!!

A profusion of colour!

At this time of year, the landscape around here is increasingly covered in pink, white, yellow and purple wildflowers. Just like what a blue sunny day does for the soul, these blankets of colour seem to transfer a sense of energy and positive feelings when one is near them. 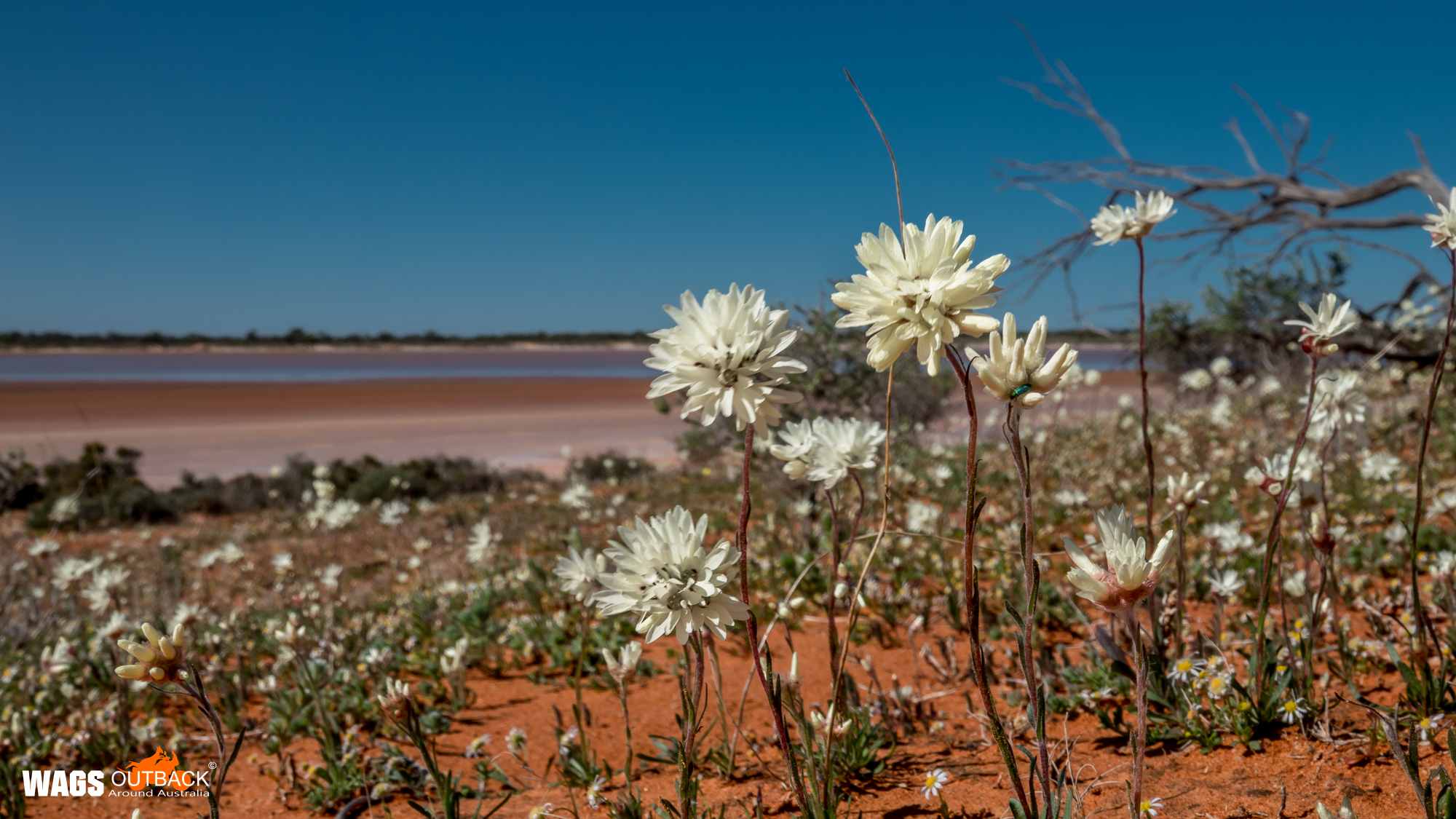 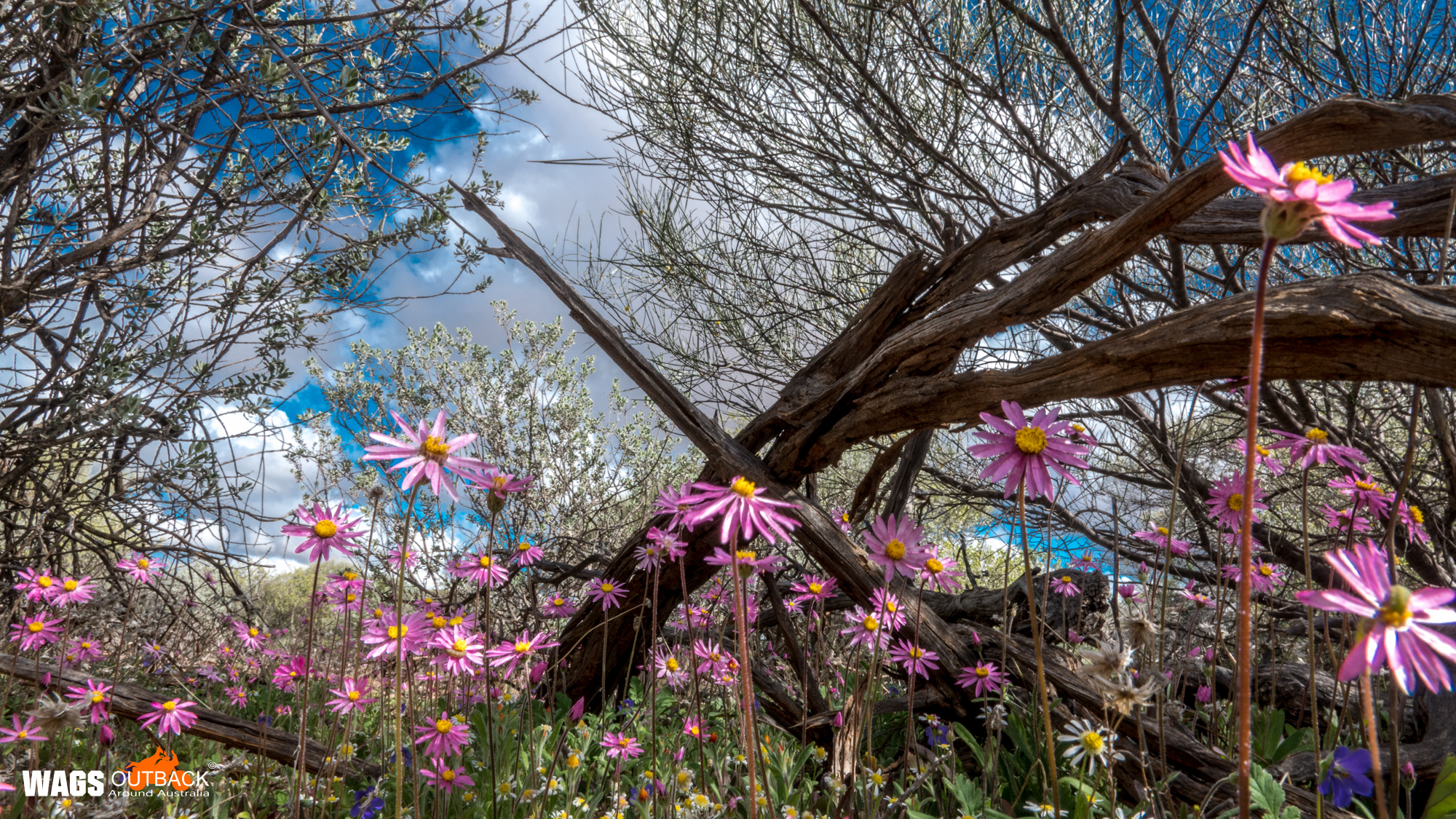 Some of these, such as the spider orchids and donkey orchids, draw visitors from all over the world. They only flower at a certain time of the year, specific timing of course subject to rain and temperature. 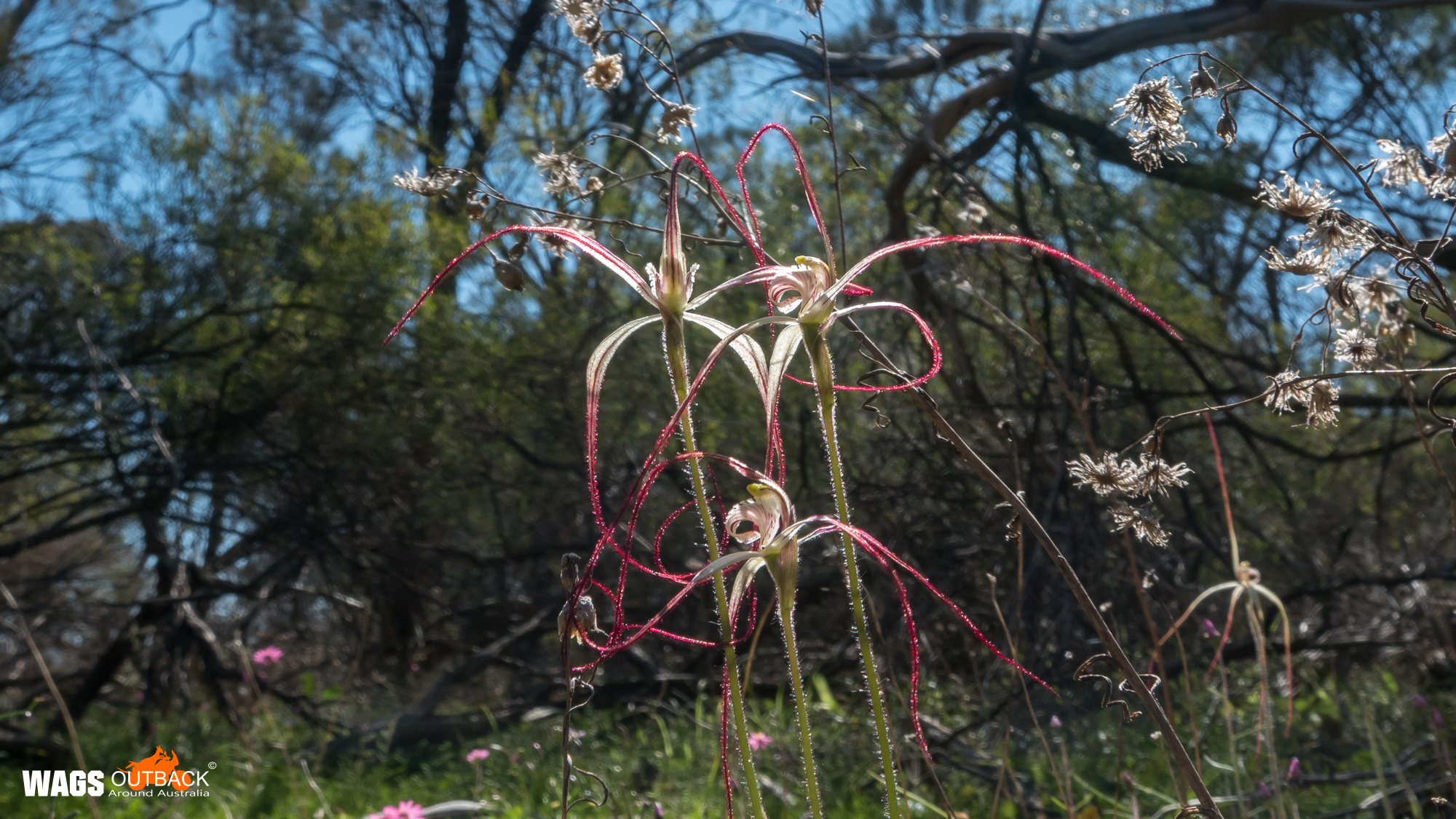 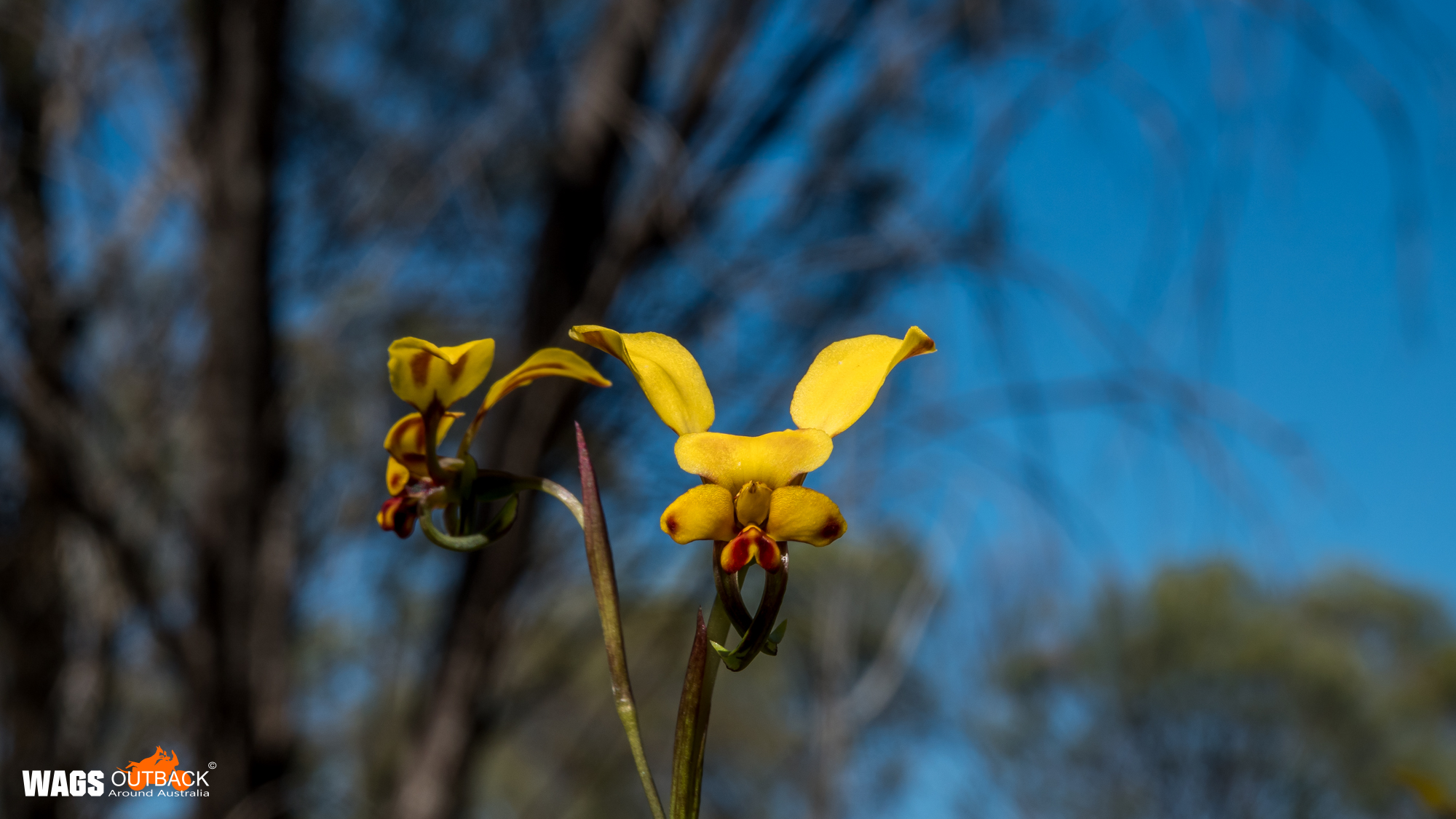 At this time, the famous wreath flower is not yet on show, but plenty of others are starting to pop up, if you know where to look. Tourist Information Centres such as that in the small town of Perenjori can offer up the latest sightings. 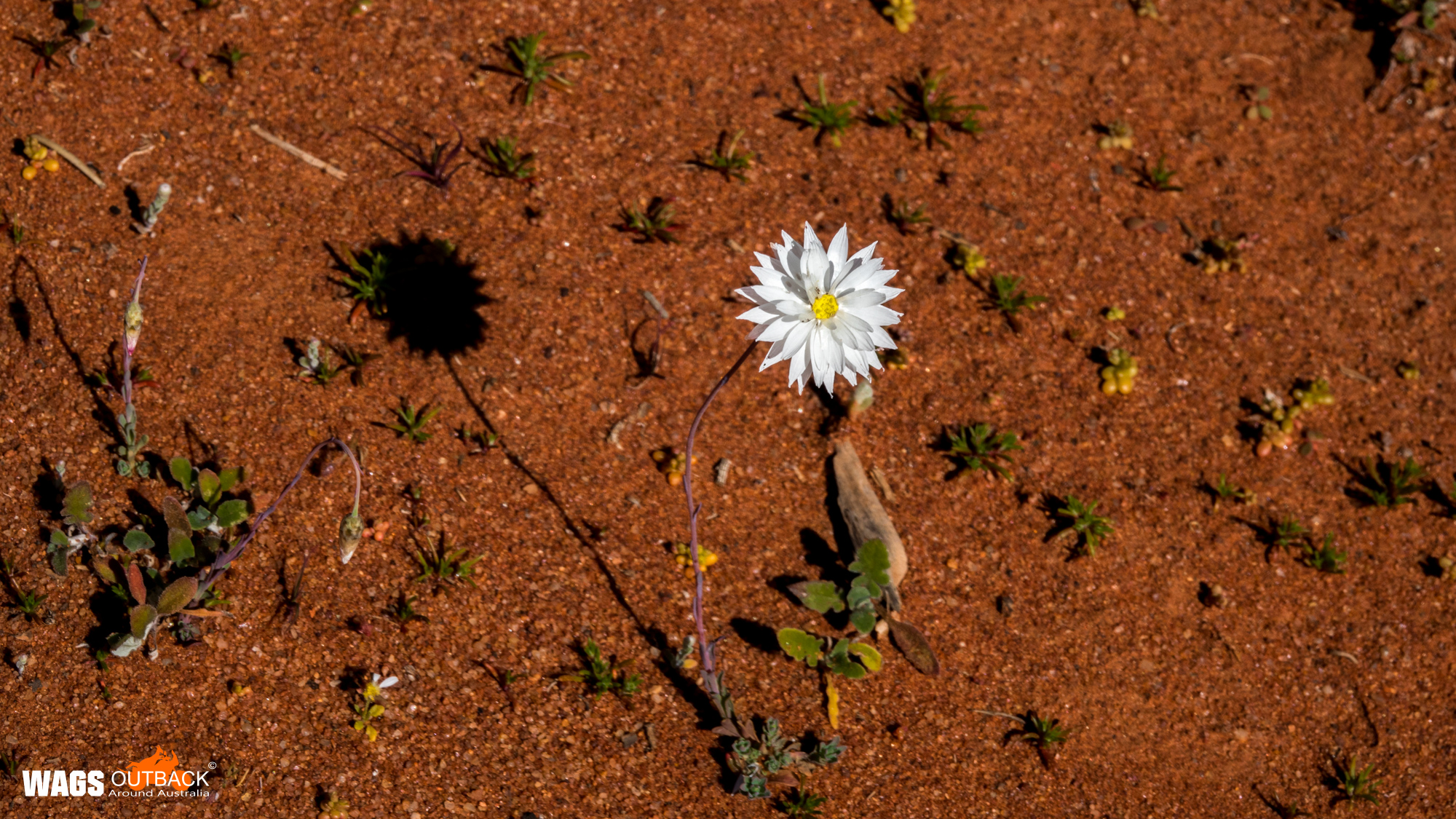 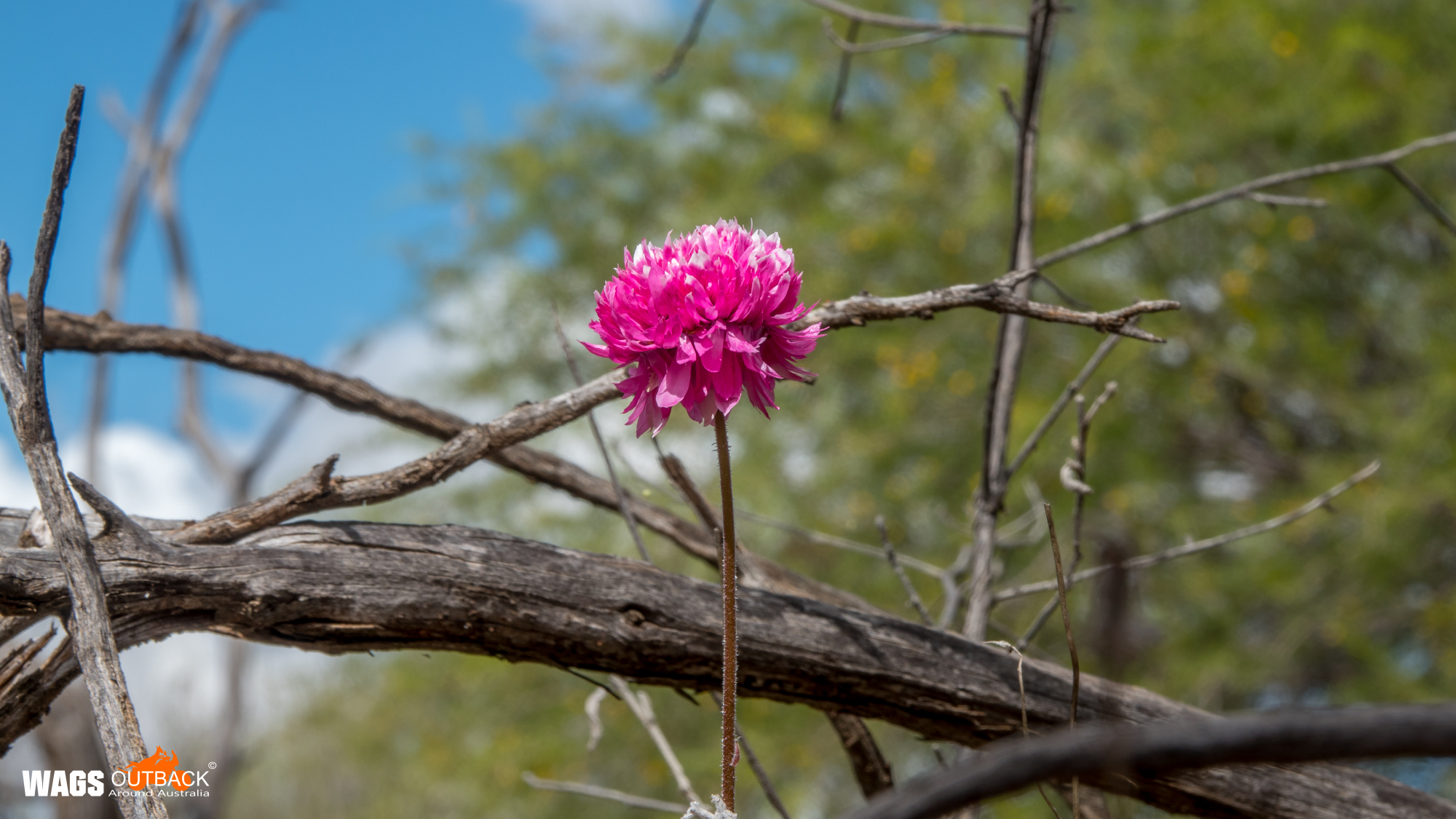 We stopped at a raised salt-lake crossing to take some quadcopter footage. Wags has been building his own FPV machines for years, as they provide a fun way of flying when contrasted with the more commercial, store-bought ‘drones’.

And then came the emus!

After about half an hour, we spotted a group of emus walking along the edge of the bush line, and before long they emerged onto the salt lake itself, heading toward the large area of water that’s come from some rains over the past couple of months. 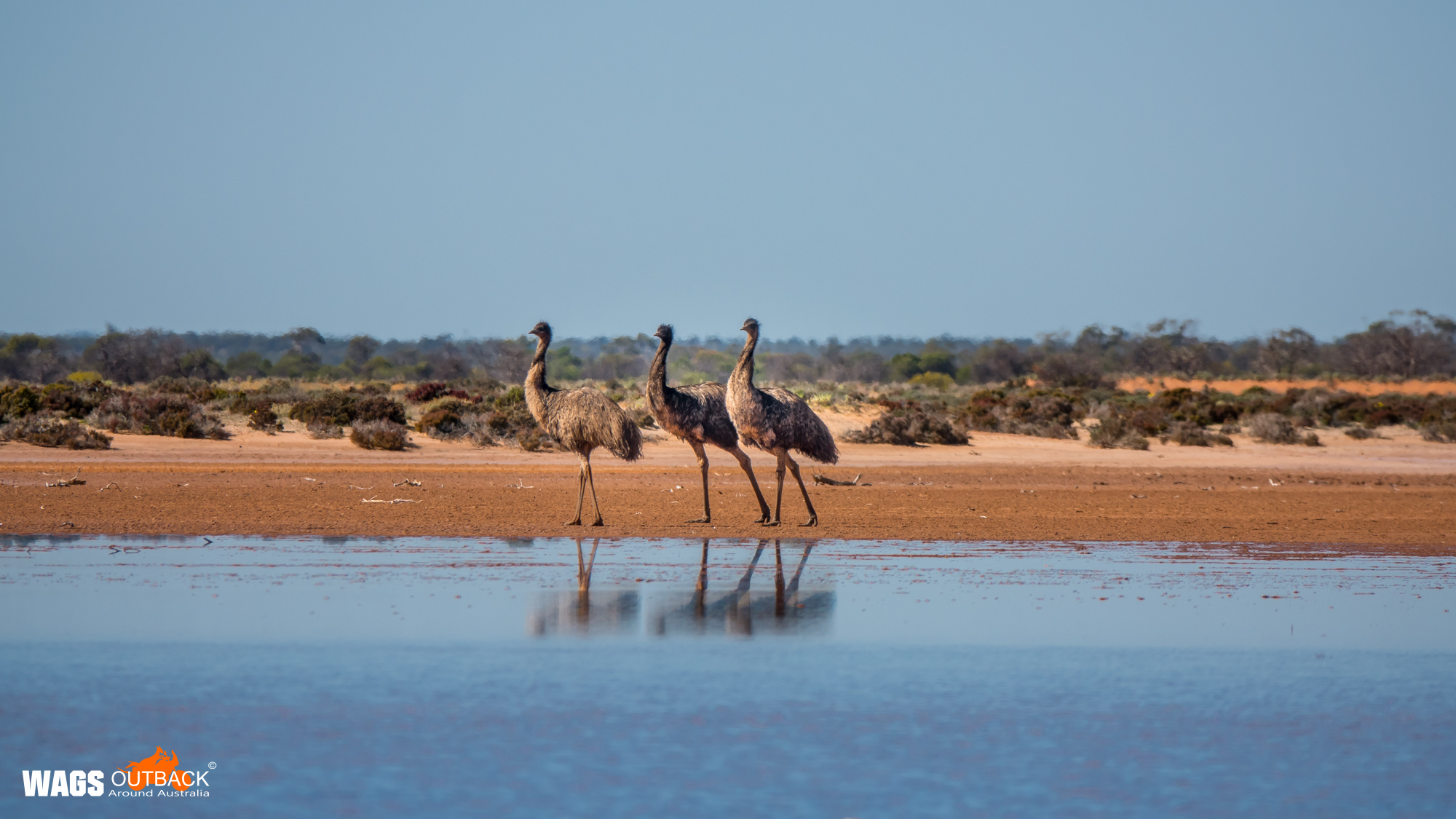 Despite their stern, prehistoric look, emus are an inquisitive creature, and if they do not feel threatened, will approach you for a curious look. Wags even flew the quadcopter over and around them, sparking nothing more than a few head turns and a grunt or two as they continued their sojourn through the water. 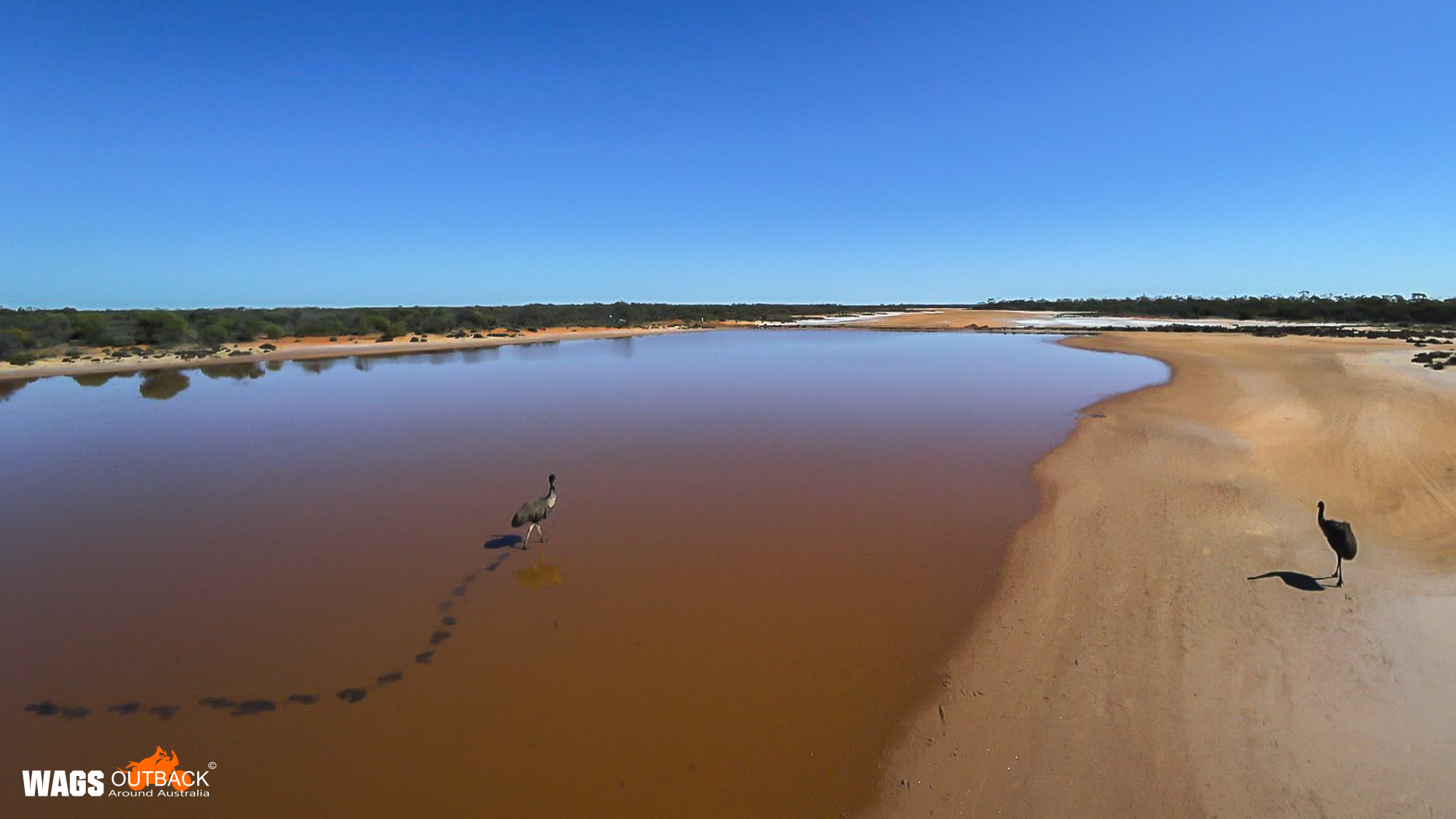 Not long after, a duck squawked as it did a low-fly pass, soon after landing gracefully on the water. 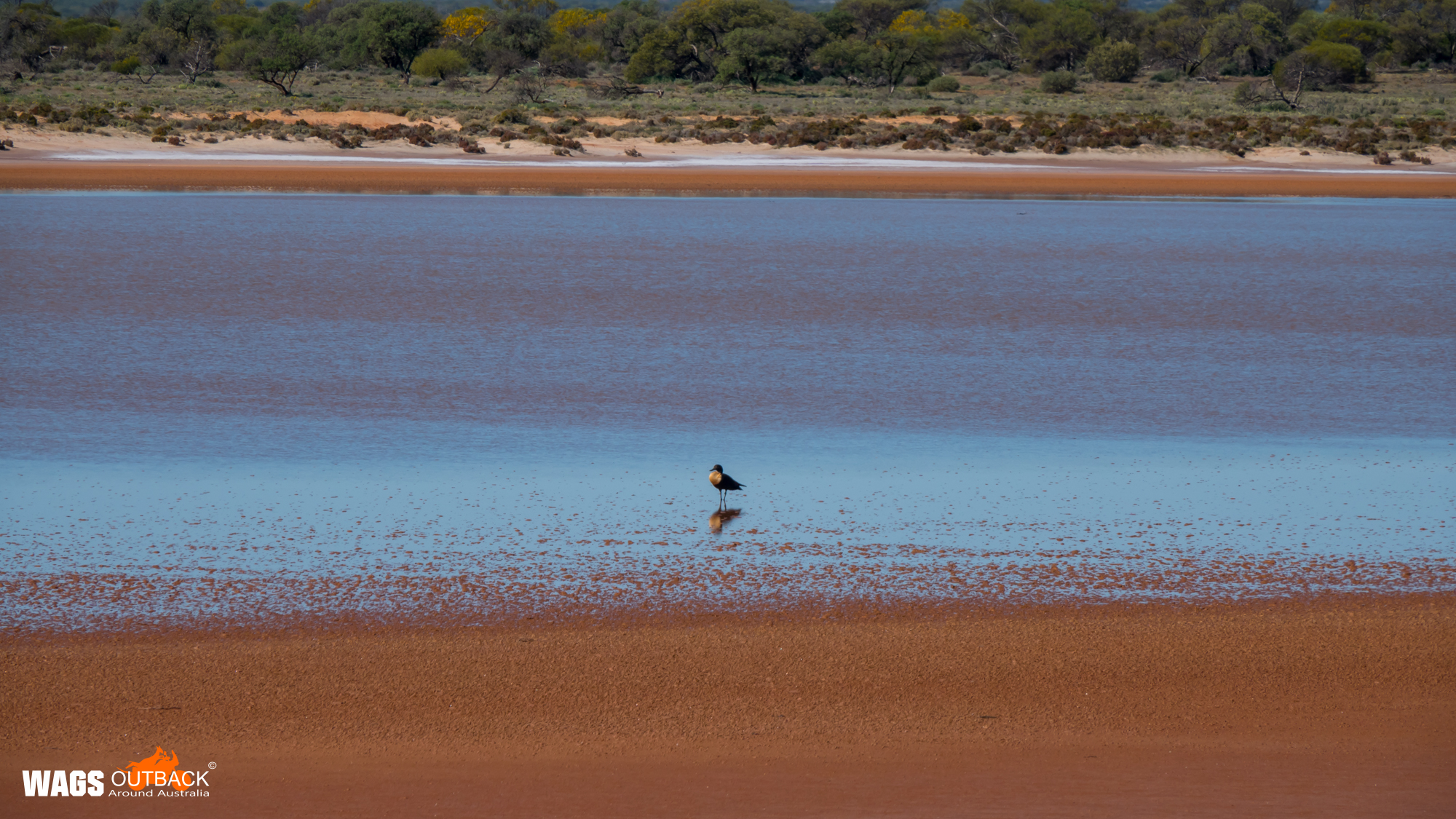 Having the luxury of time, without a specific daily agenda, has afforded us these opportune moments to connect with our surroundings.

We found a campsite beside another salt lake. Like many of our campsites, this was a random find, sparked by our impulsive curiosity about the small two-wheel dirt track that veered off to the right. Remnants of an old bush camp were strewn along one edge of the tiny lake, most likely used by sandalwood cutters from times gone past. Between 1844 to 1929, Western Australia was a dominant exporter of sandalwood, purchased mainly by Chinese merchants in Singapore and Shanghai…. to be powdered for incense. Given fluctuations in gold discovery / exports at the time, sandalwood was a highly prized export. 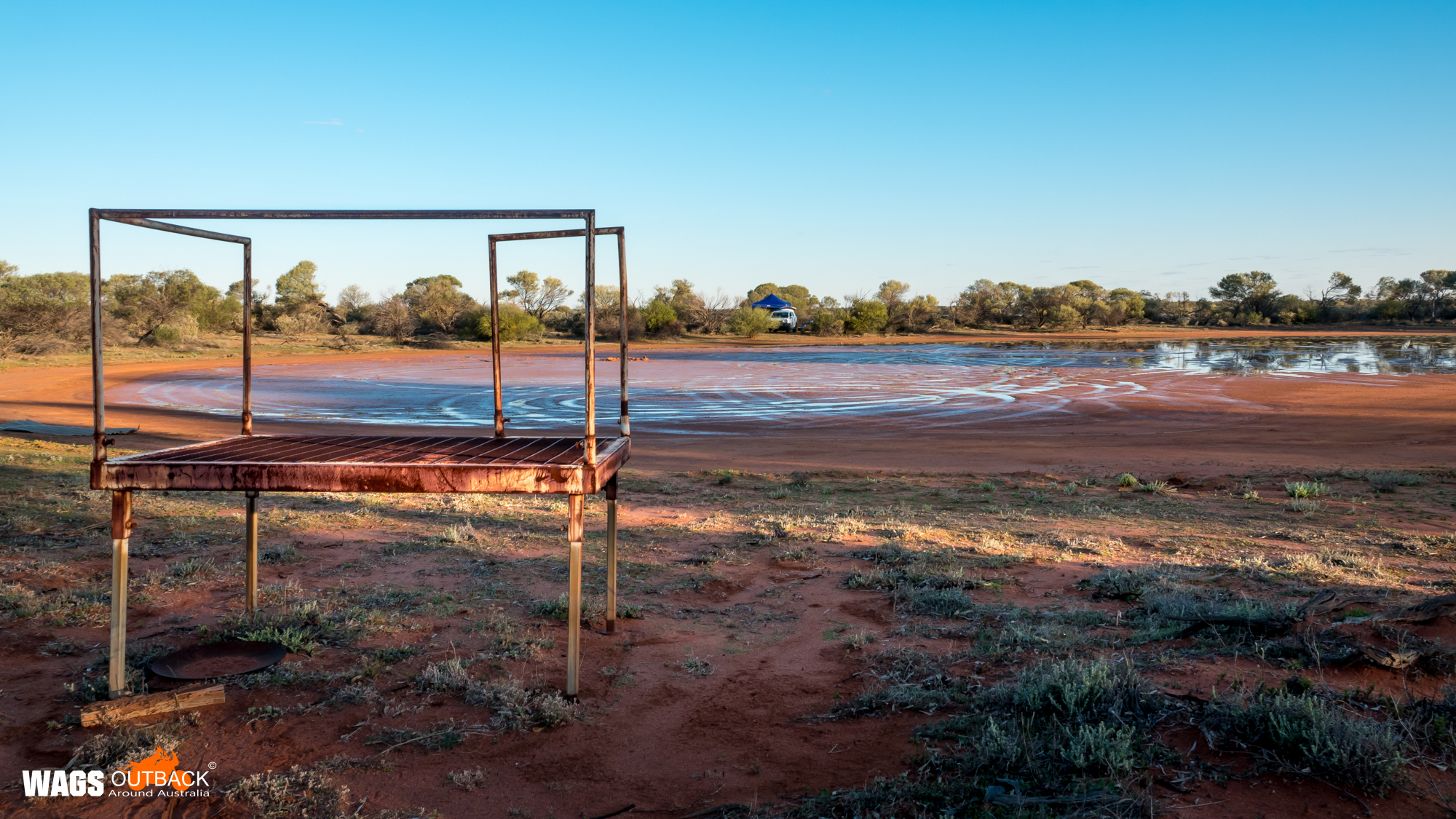 We decided to erect the larger tent as it was our intent to hang about the entire next day... and it’s always great to have an escape from the flies which are unrelenting! 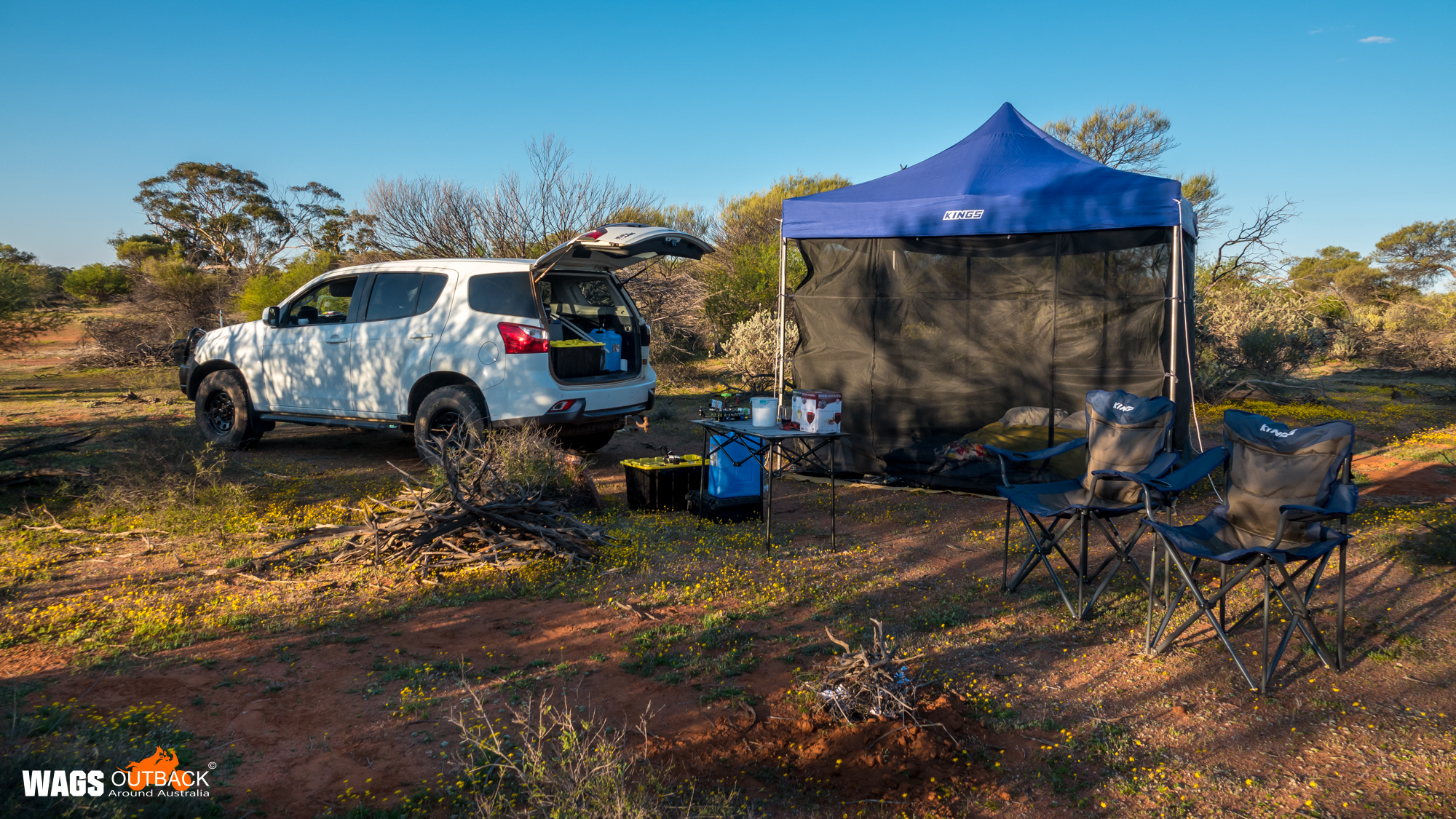 Once camp was setup, I walked through our camp carpet of tiny yellow flowers, to the top of a small hill, glass of wine in hand, and stood very still, watching the coloured landscape changing as the sun slowly set.

But not all was still...

Because, as I closed my eyes, my ears began to dance. It was like I was standing in a dolby digital left-and-right surround sound studio. In my left ear, a chirping bird, in my right, a warbling butcher bird. Then, a buzzing fly cut through it all. The clarity of the sound sensations heightened by the stillness.

A jet plane flew quietly overhead, and I turned to try and spot the source of the faint rumble, revealing a whole new range of different bird and insect sounds, which continued long into the evening.

Back near the campsite, galahs and other birds circled the lake, noisily enjoying their final evening drink before darkness set in. Not unlike your average Aussie, I suppose! 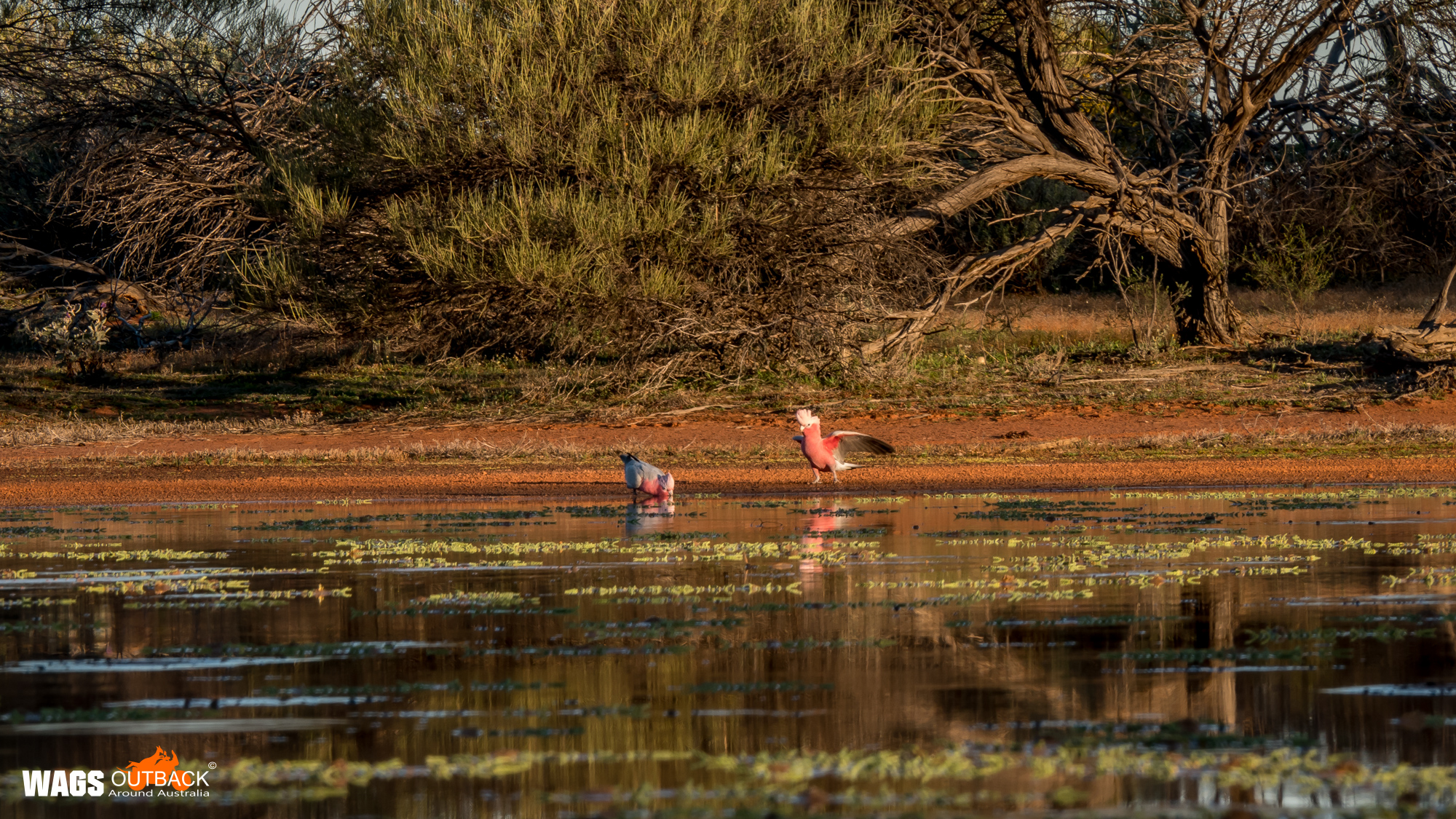 It was time to light the fire and cook up some dinner. We’ve come to love cooking on our BBQ plate on the open fire. The food tastes great and we don’t have to worry about gas-bottle refill. At this time of year, we need the fire during the nights and early mornings for warmth anyway. 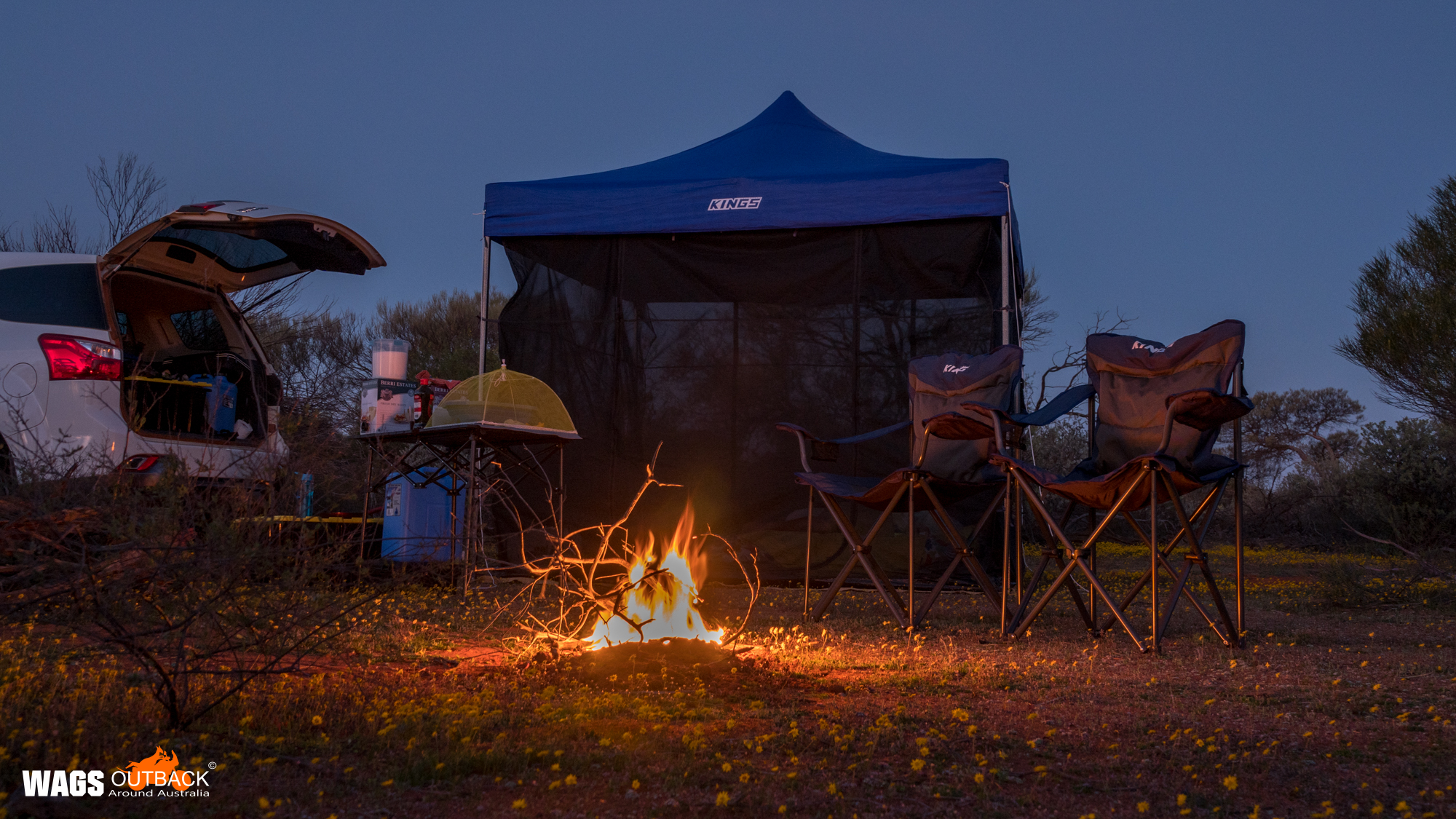 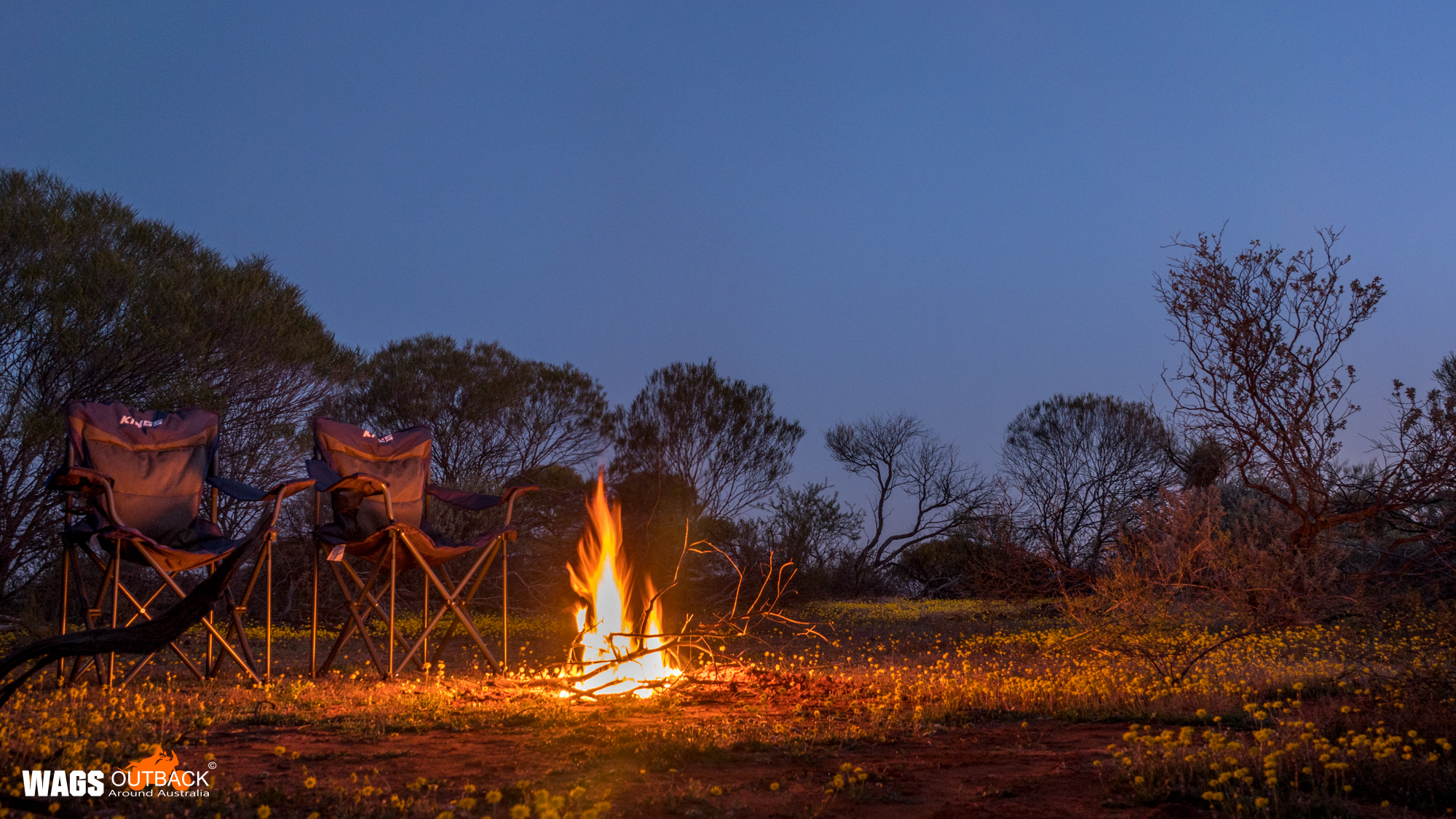 And it was indeed to be a cool and rather wet night – all night we could hear the drip-drip of condensation settling on and around the tent. For most of the night, a bird squawked in the tree-top distance, as though it were in pain, or perhaps a baby separated from it’s mum. We discussed the possibilities in sleepy tones as a thick fog closed in.

The sound studio continued into the dawn as the birds began to wake and chirp in anticipation of finding food. I decided to brave the damp and take some more photos, for who doesn’t love the image of fog-shrouded gums and eucalypts, casting their reflection on the mirrored salt lake.

Moisture hung idly from the shrubs and flowers, the yellow daisy flowers firmly closed, waiting for the light and warmth of the sun before coming alive. Just like Wags, still buried beneath his bright yellow blanket, refusing to peek out and acknowledge the gloominess. (I’m sure he just loves being likened to a flower!) 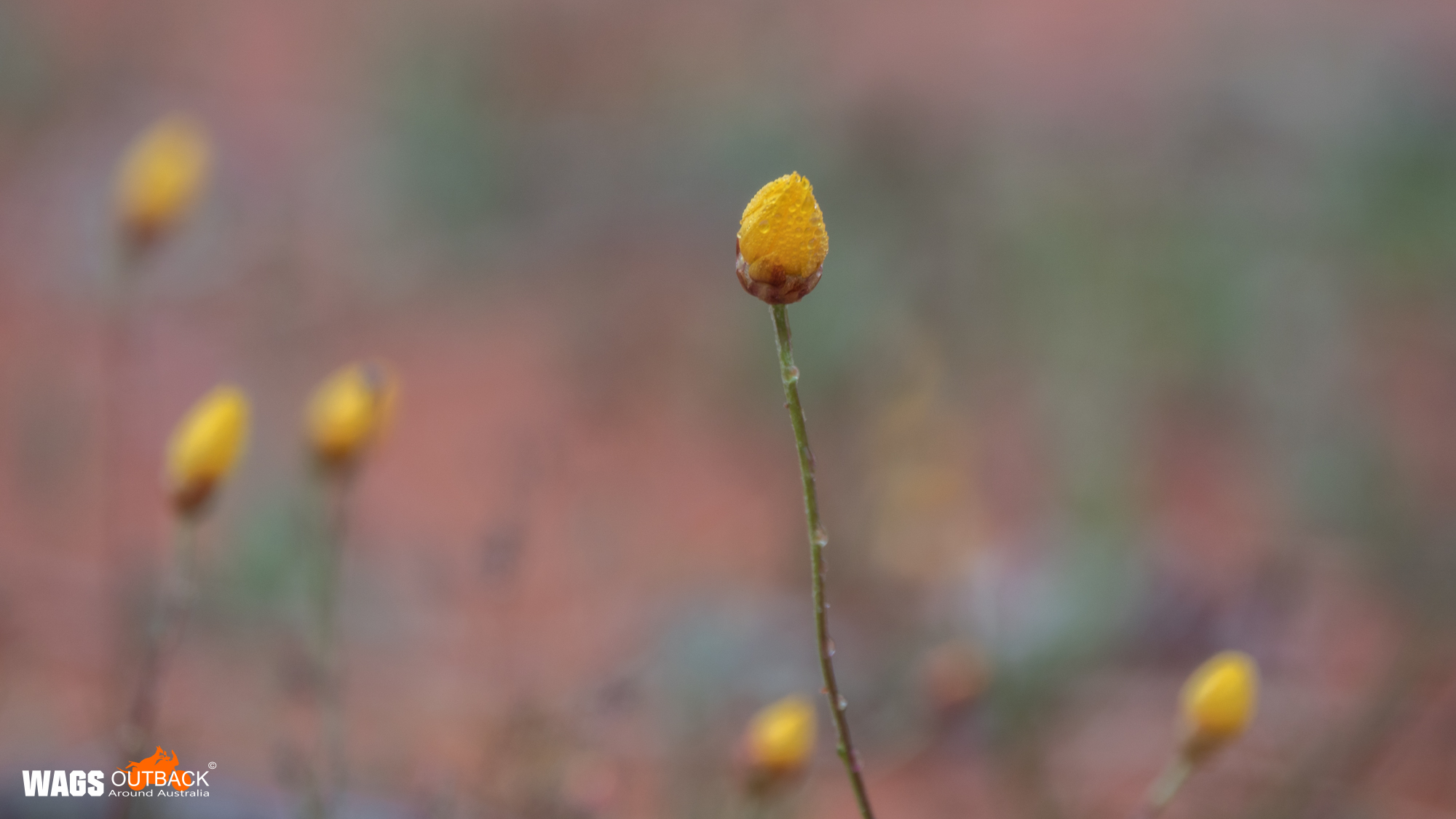 Time to light the fire again and warm up! Despite everything being damp, the coals from last night’s fire were still piping hot, and the dry dead scrubby bush lying around removed the need for any newspaper or kindling – it created flames as quickly and as large as a firestarter. Before long, it was throwing out enough heat and warmth to warrant an interested and hopeful peek from Wags, and soon he emerged and made the coffee.

A big bloody YAY to that! To think I used to purchase 2-3 store-bought lattes each day, and now I'm loving my instant brand...! 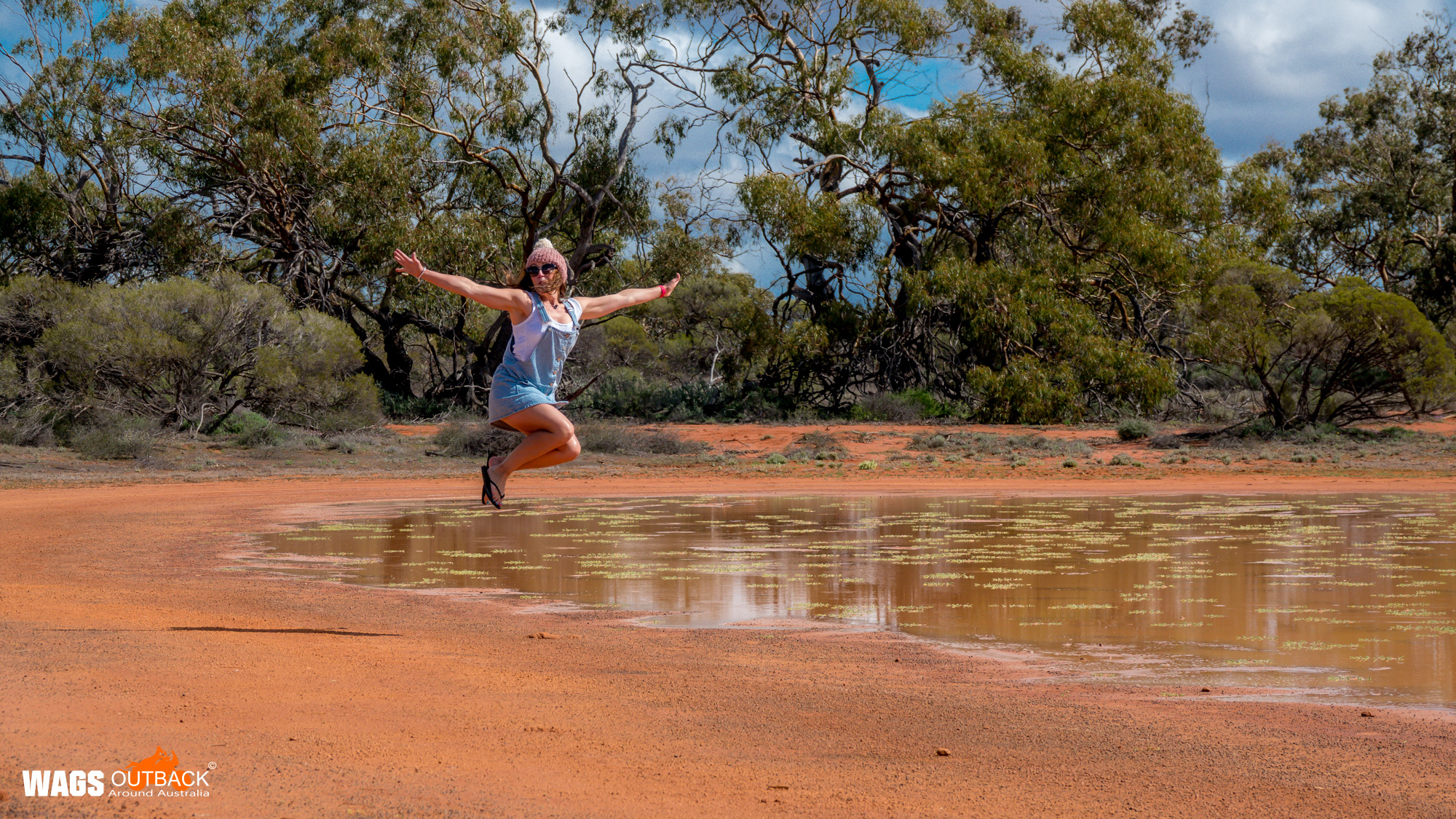 The condensation had pooled inside the tent overnight (we’d only used our flywire wall) and so we hung all our wet stuff on a large branch by the fire. Somewhere during the process, Wags accidentally set the drying branch on fire, but it didn’t take long to find a replacement, with that much dead dry wood laying about.

The rest of the day was simply about exploring and enjoying the increasingly warming sun. We found lots more flowers – around every corner seemed to be a larger and brighter carpet. The larger salt lake nearby painted the perfect backdrop. 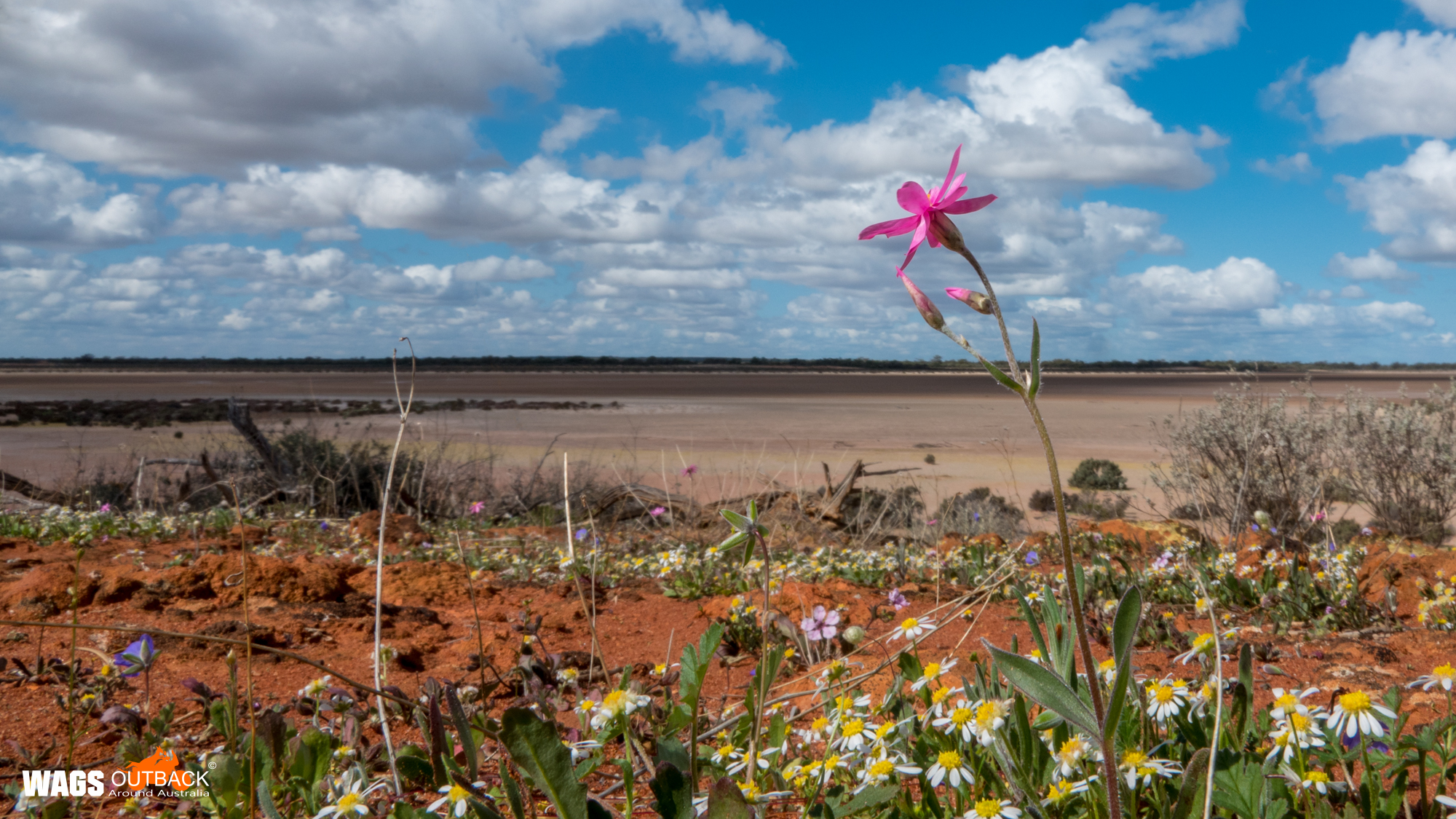 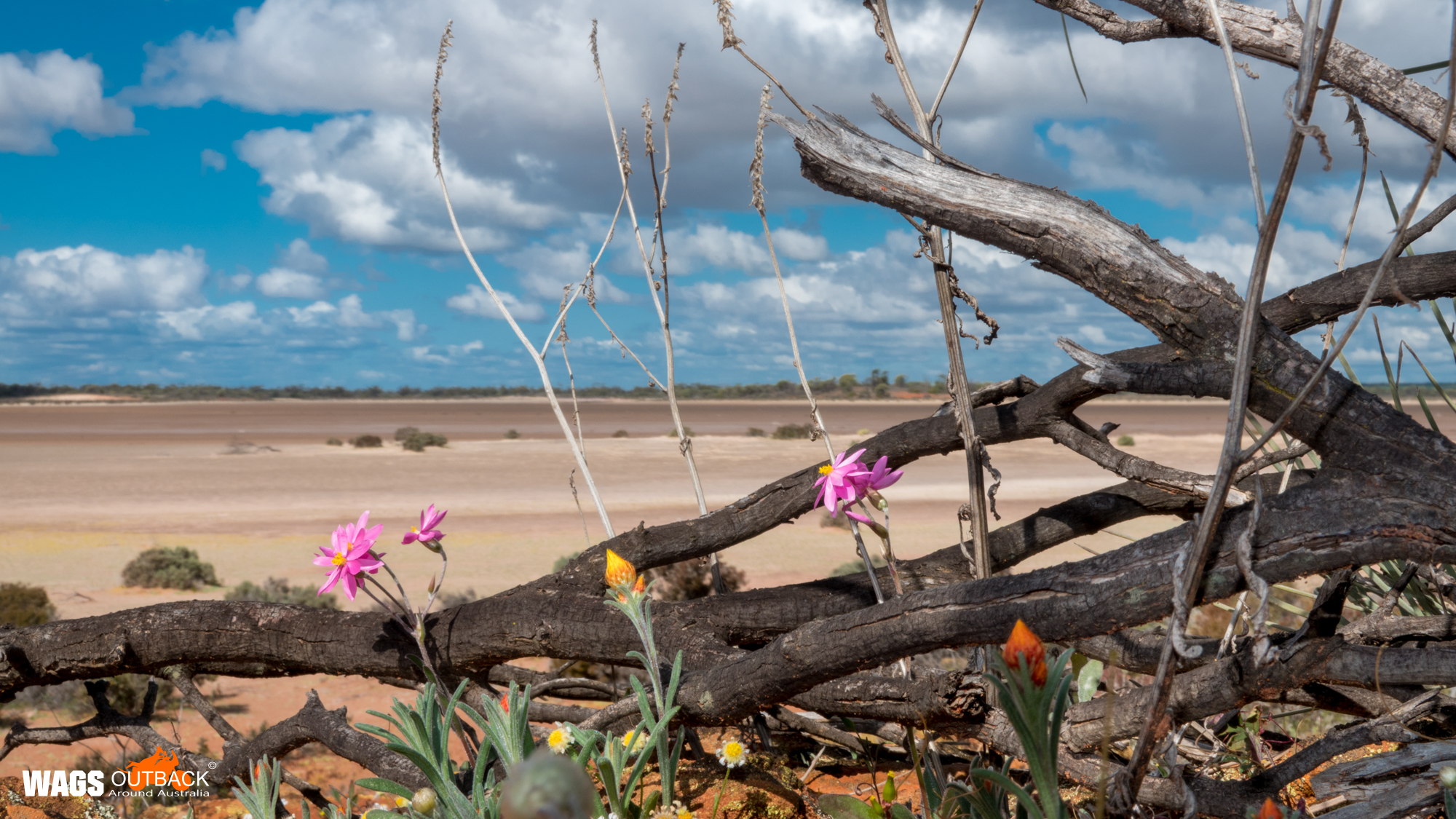 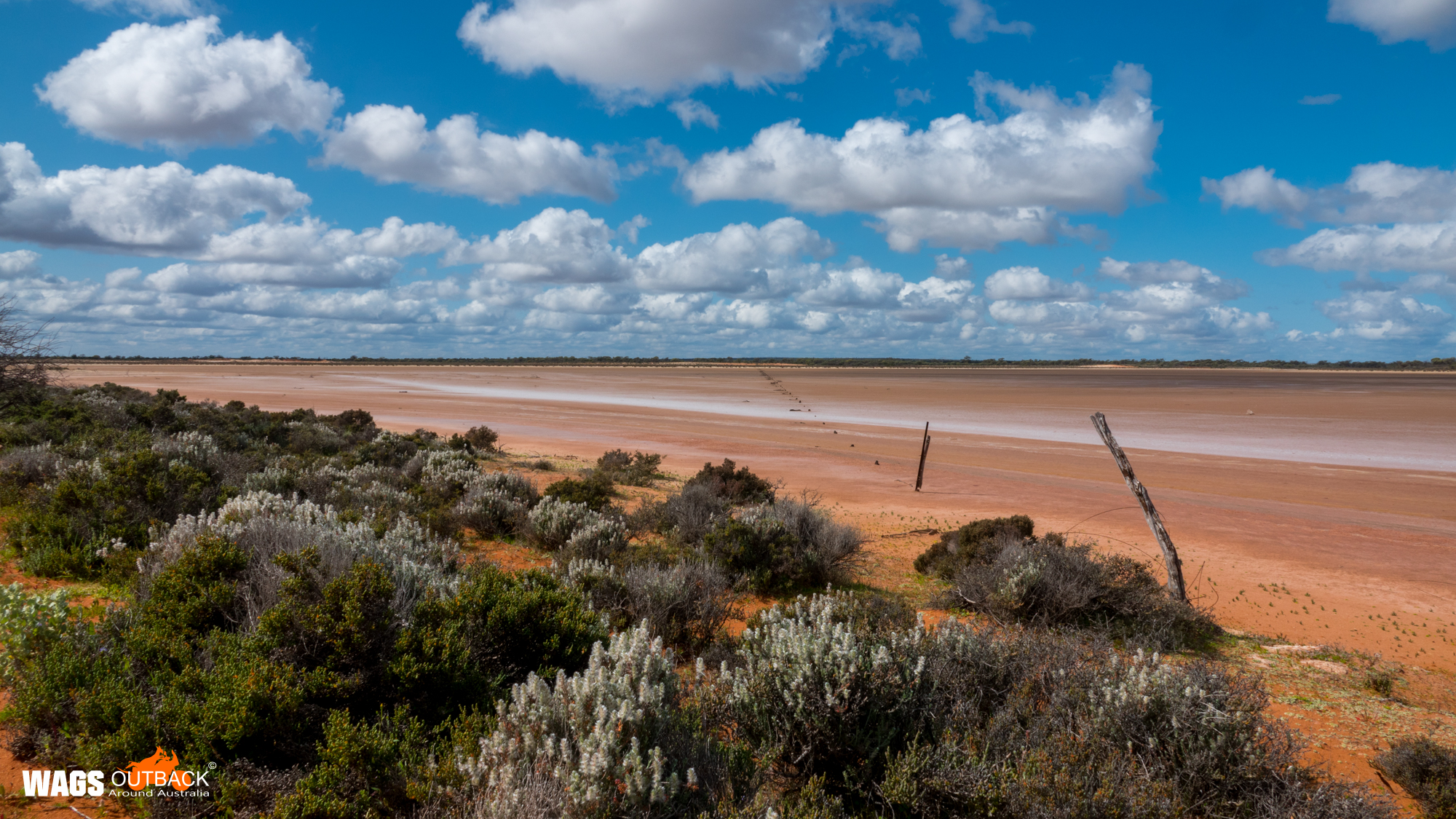 Wags did a few FPV flies, continuing to test the stabilization on the quadcopters he’s recently re-built. The build is technical - small factors such as battery size and weight, and prop size, all make an impact. Here’s a photo of him in action. He finally gave up on all the insects and flies crawling up his nose, and donned his fly-net …… because when he’s got the quadcopter in the air, he cannot release his hands from the controls. 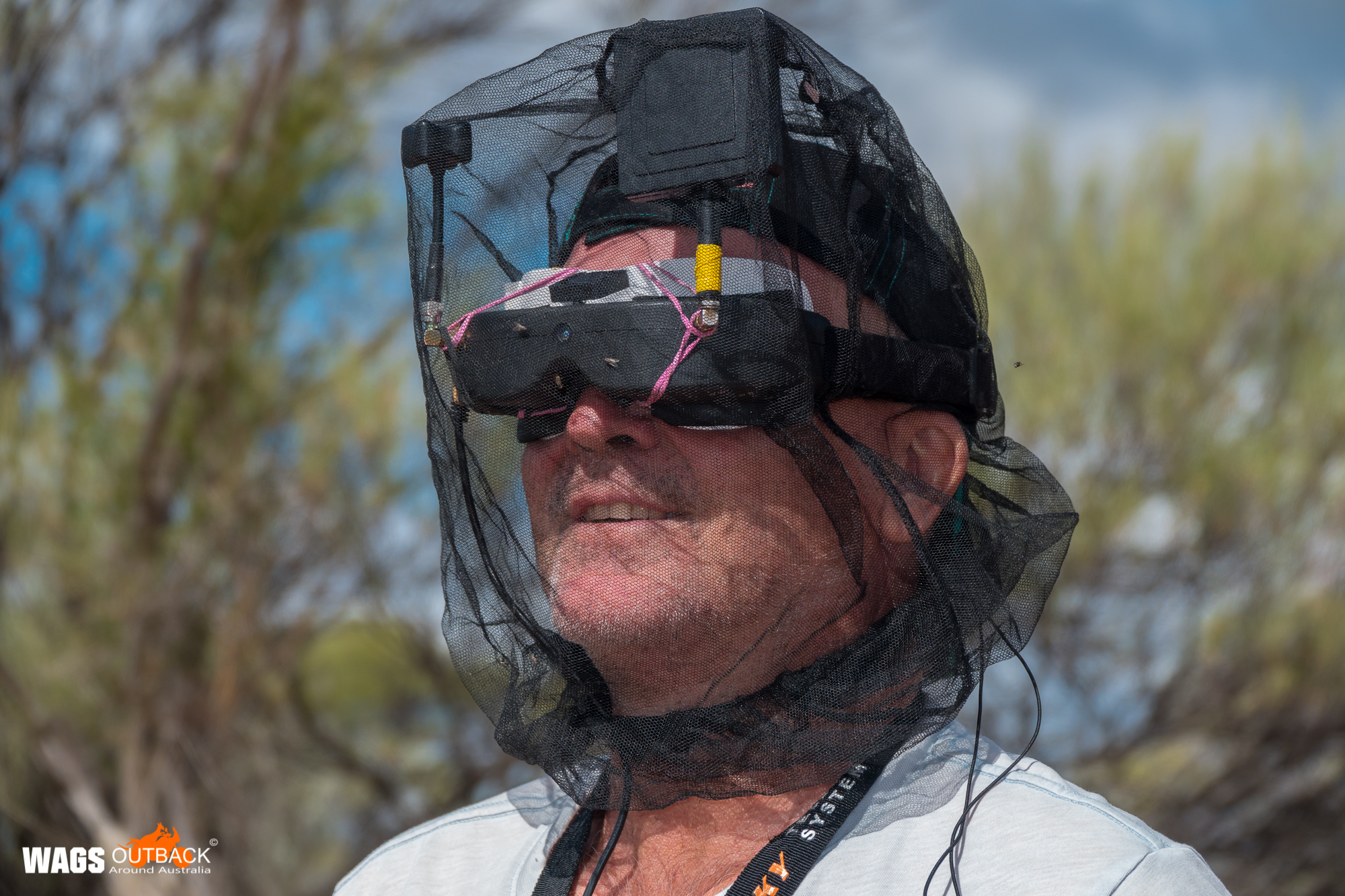 Time for a mineral-rich mudbath

Before finally packing up the camp, Wags decided he needed a mudbath. This comprised of stripping naked, and rolling around in the mud till his entire body (minus head) was coated in the slimy brown stuff. And then walking around in the sun till it dried. Unable to penetrate the mud, the flies gave him a brief break. And the drying mud created a skin-tightening feeling which he said felt really rather unusual when you stretched and let it crack apart. 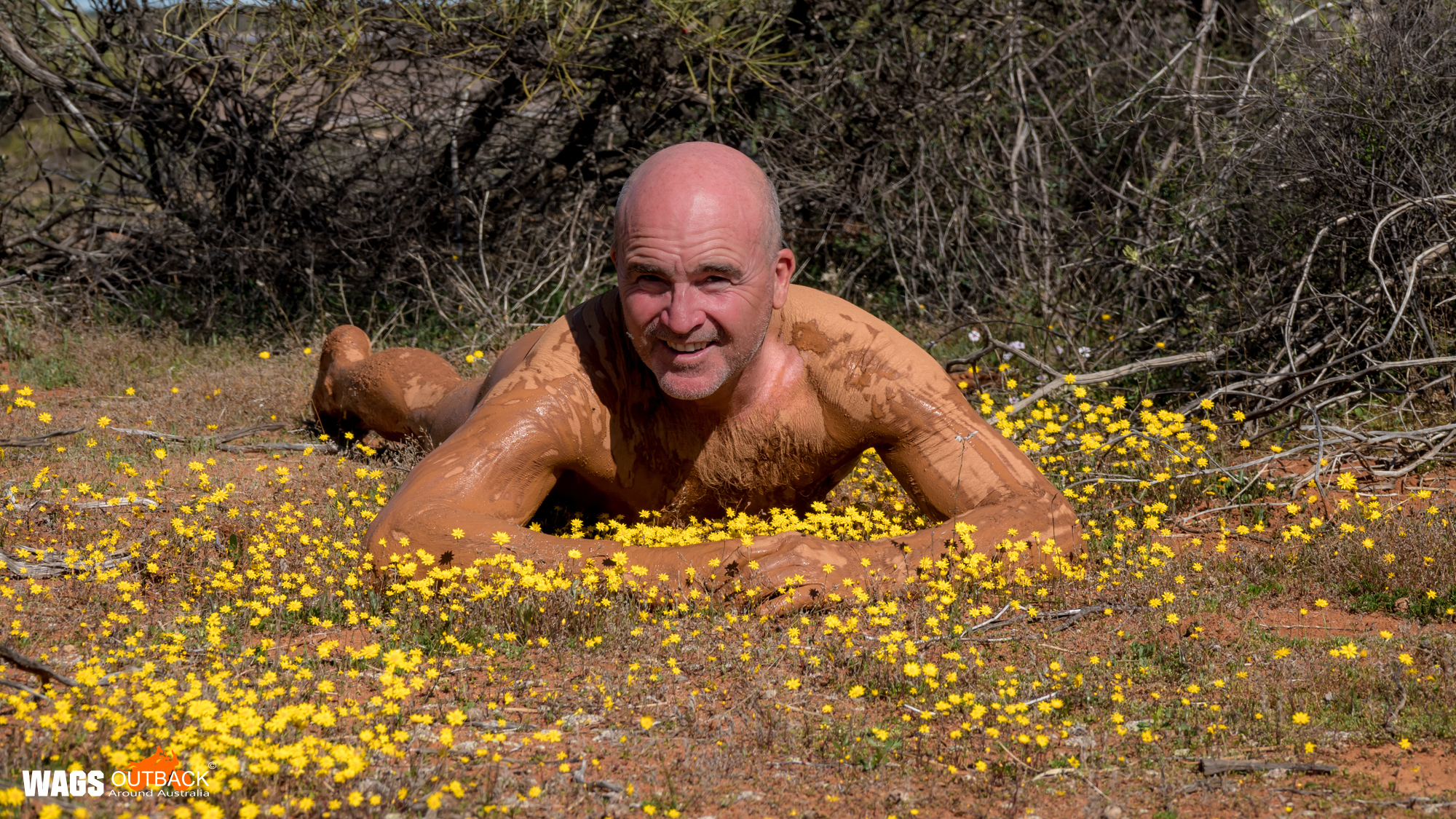 The boy cracks ME up, but as he says, people pay big money for stuff like this! Mineral rich mud is said to have medicinal properties and be great for the skin! I was tempted to follow suit but I wasn’t sure we’d have enough water to wash two muddy bodies, so I just sat back and took photos of him instead, most of which he won’t let me post!

What a great couple of unscripted days! We’re constantly thankful to have the opportunity to experience the Golden Outback of Western Australia in this way, with very little agenda or pre-planning. It really allows us to have an 'off the well-worn track' experience.