Vastly Vast Australia – driving it from WEST to EAST

A tiny white SUV towed a sweet, grey box trailer across a vast red desert. Named MUXI-Anne, her owner coaxed her gently. She was his beloved ride, and she hauled precious cargo. A big fast motorbike named ENZO. A stash of computer and camera equipment representing his life. And his little Victorian girlfriend, who sat for most of the hot journey with legs crossed in schoolgirl manner. Rather unladylike considering she wore short dresses, consequently revealing her coloured underpants quite often. 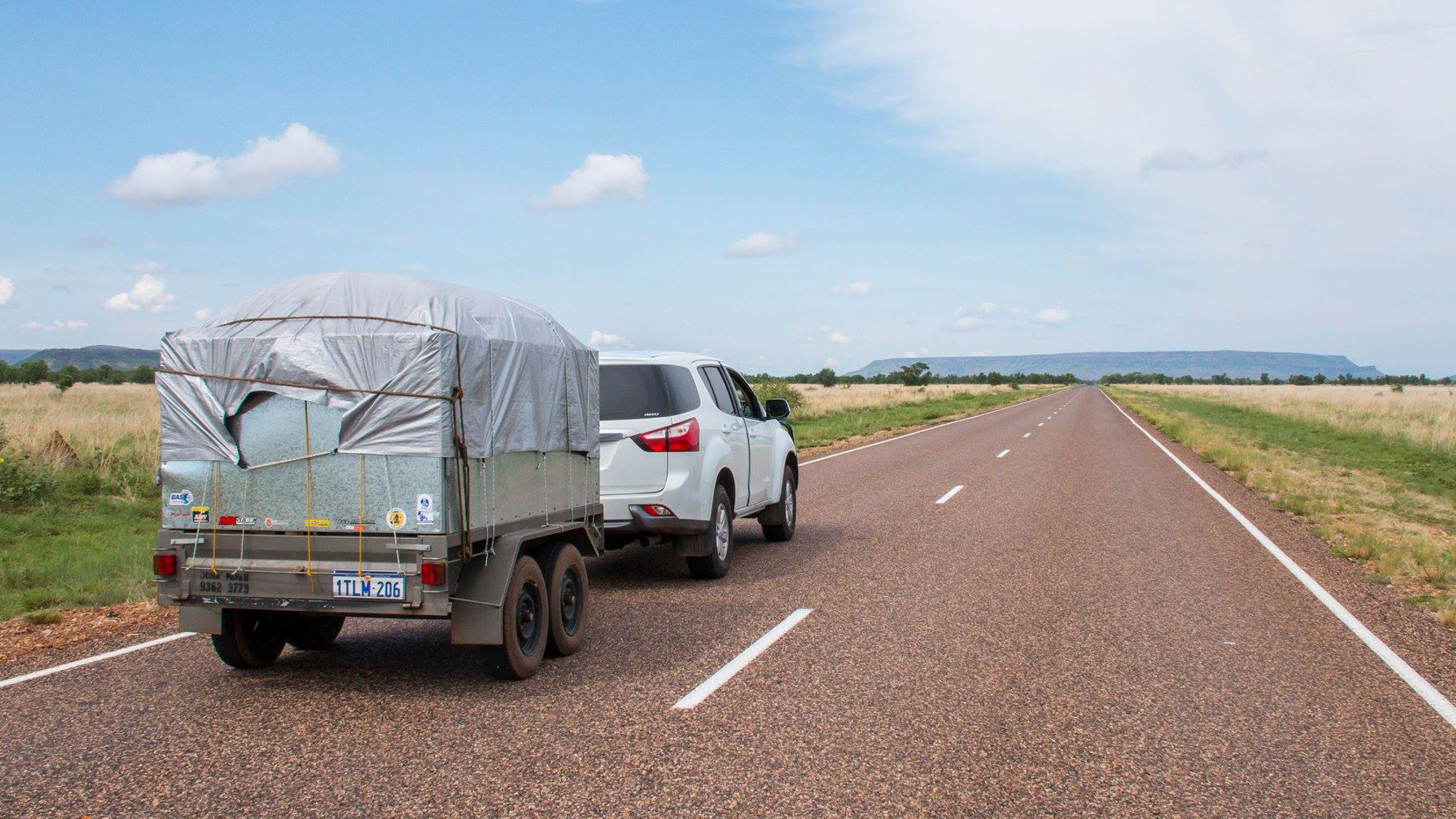 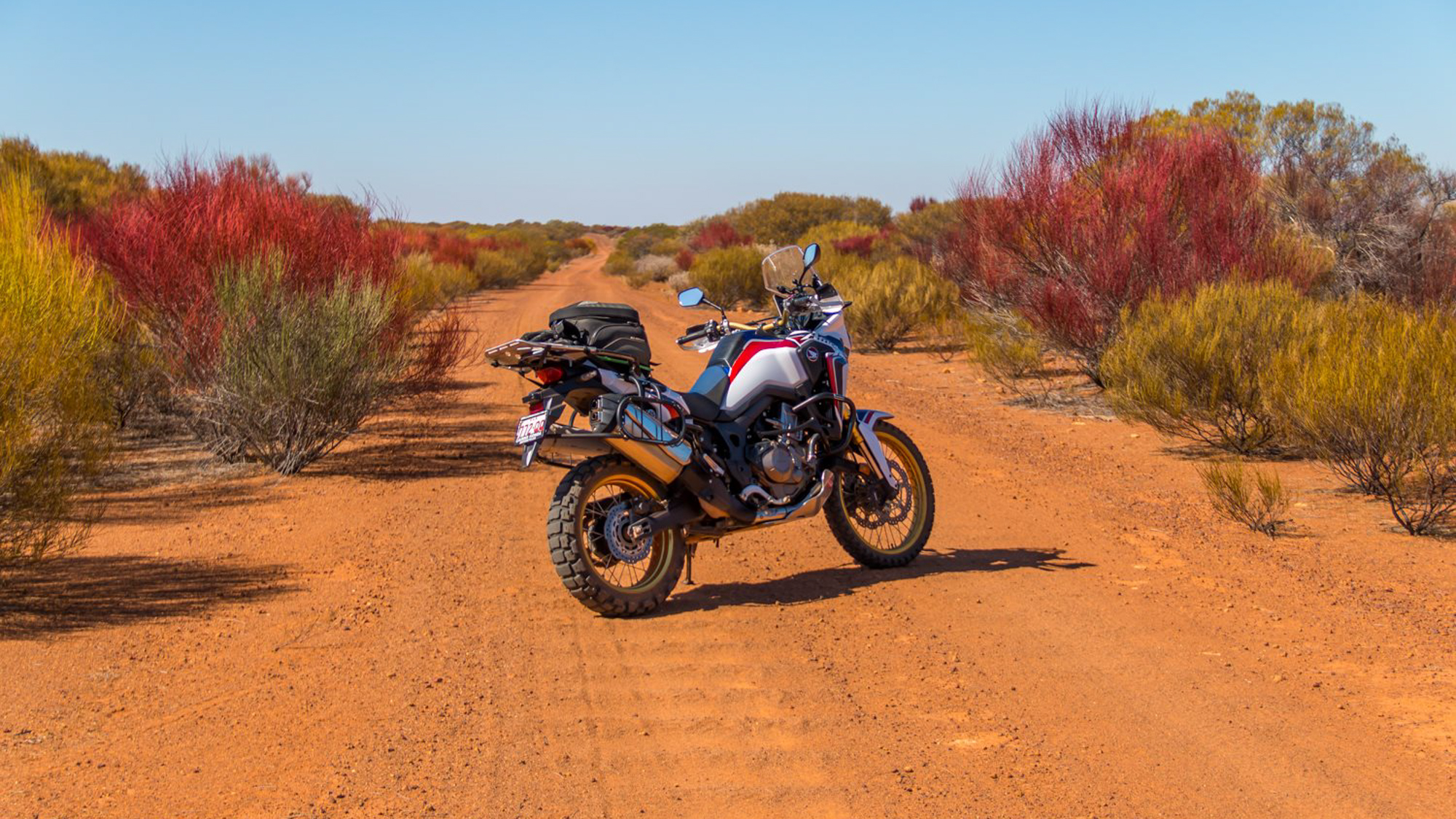 MUXI-Anne had been living in remote West Australian farmlands. She'd seen the red, iron-rich earth transformed into hues of vivid wheat-greens, bright canola-yellows and lupin-whites. The rains and the cold came and went, and the heat soon returned. Before long, the colour magic disappeared and the earth became a dry boring brown once more. And with the heat came the flies in plague-like quantities. And so it was time to leave, for a new life chapter with the Victorian.

The Victorian was waiting for them all at Southern Cross Railway Station, one of the many stops along the Kalgoorlie Prospector route. Dressed appropriately for the 46°C heat in a white dress. She’d enjoyed her fast, comfortable train ride on the Prospector, munching snacks as the landscape whizzed by, unaware of the heat until she burst out onto the tiny platform, the train doors slapping shut behind her.

Not many amenities at THIS little railway station! 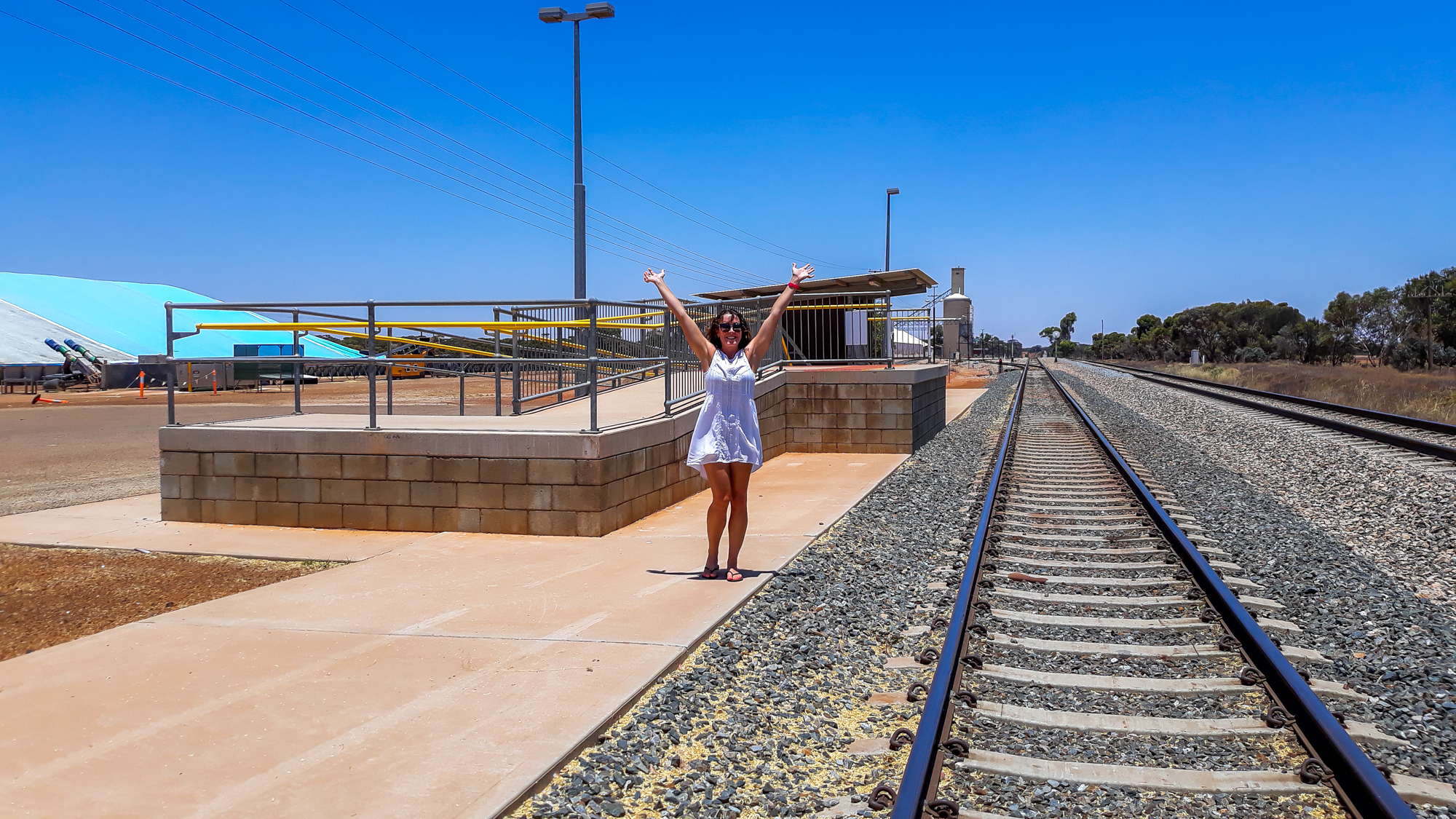 Check out this tiny lil railway station!  Blink and miss it.

Off they set, all together now. And who knew of the weather extremes to face them in the coming days as they crossed this sunburnt country from west to east.

A dark storm-cloud brewing south promised rain relief, however the grey turned orange, brown and red around the edges, forming the unmistakable shape of a smoke-pillar. The smokey skies cast warm tones on the landscape, the types of natural colours that photographers dream of. During a fuel stop at Norseman, one marveled at how fresh the air still smelled, notes of warm eucalyptus and steamy hot gum leaves dancing in the nostrils.

Norseman is a town with it’s origins in gold prospecting, lying south of the gold rich areas of Kalgoorlie-Coolgardie. It’s the last town in Western Australia before turning east to head across the Nullarbor plain. The <>only route East from these parts. Esperance to the south is the alternative (and spectacular) destination.

24-hour rest stops are abundant in Western and South Australia. It’s really easy to pull off the road at a time convenient to you, and camp in the bush, at a safe distance from the highway.

That’s assuming you’re OK to squat in the bush with your spade and dunny role. 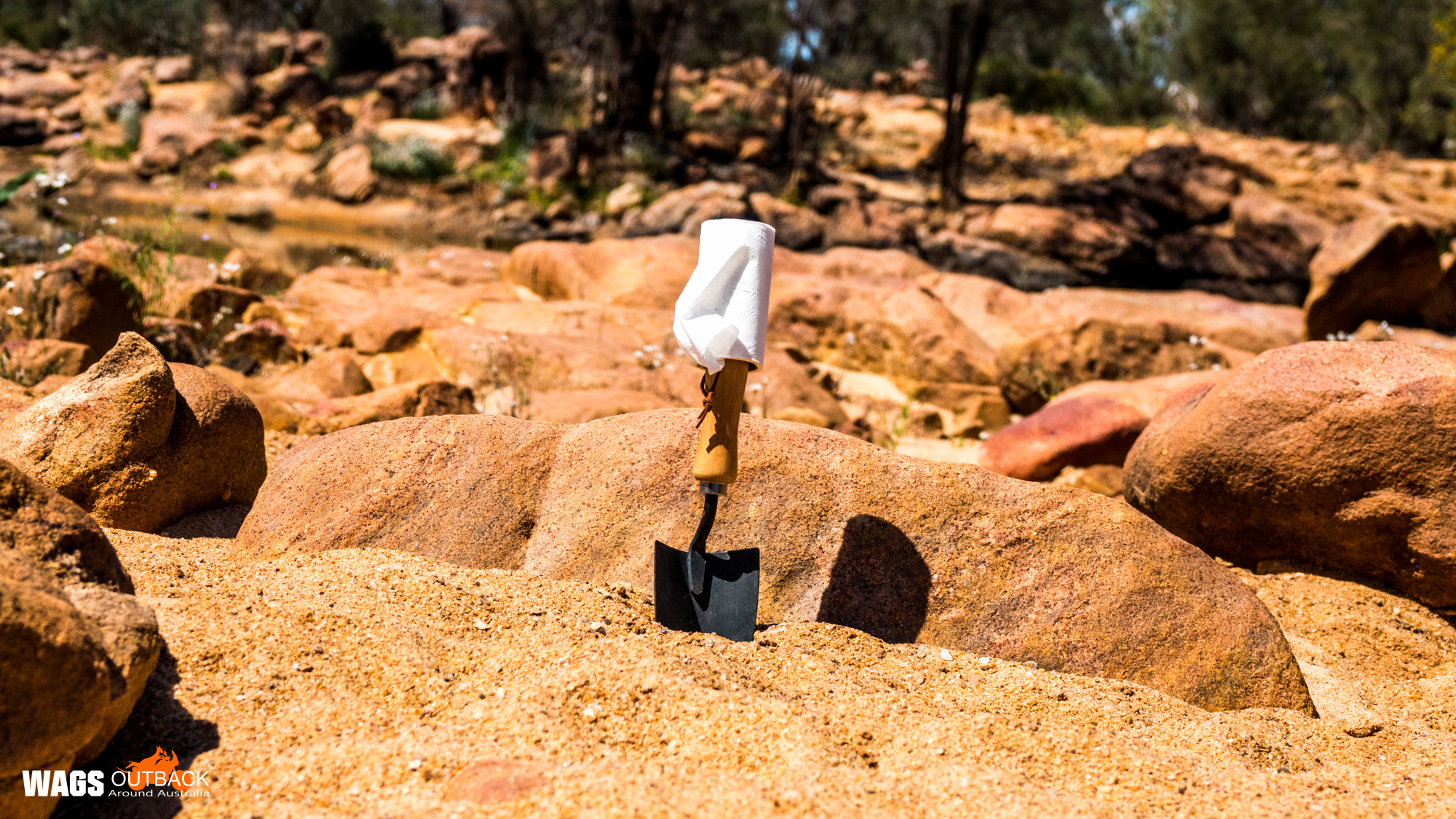 Don’t expect total serenity though, for whilst MUXI-Anne preferred not to share the road with hungry kangaroos foraging in the cooler night temperatures, large noisy road-trains care FAR less. Size DOES matter on these occasions and road-trains have the advantage in any altercation.

An enthusiastic swarm of bees attacked the camp at daylight! Fixated on everything that the Victorian had touched. Possibly something to do with her coconut lip balms, lemongrass handcreams and all manner of girly smells! It was a hasty departure at 5am - so much for enjoying coffee and promite-on-toast!

The 90 mile Straight is part of this journey, Australia’s longest stretch of straight road. No GPS needed here! But the passengers finally got their coffee. 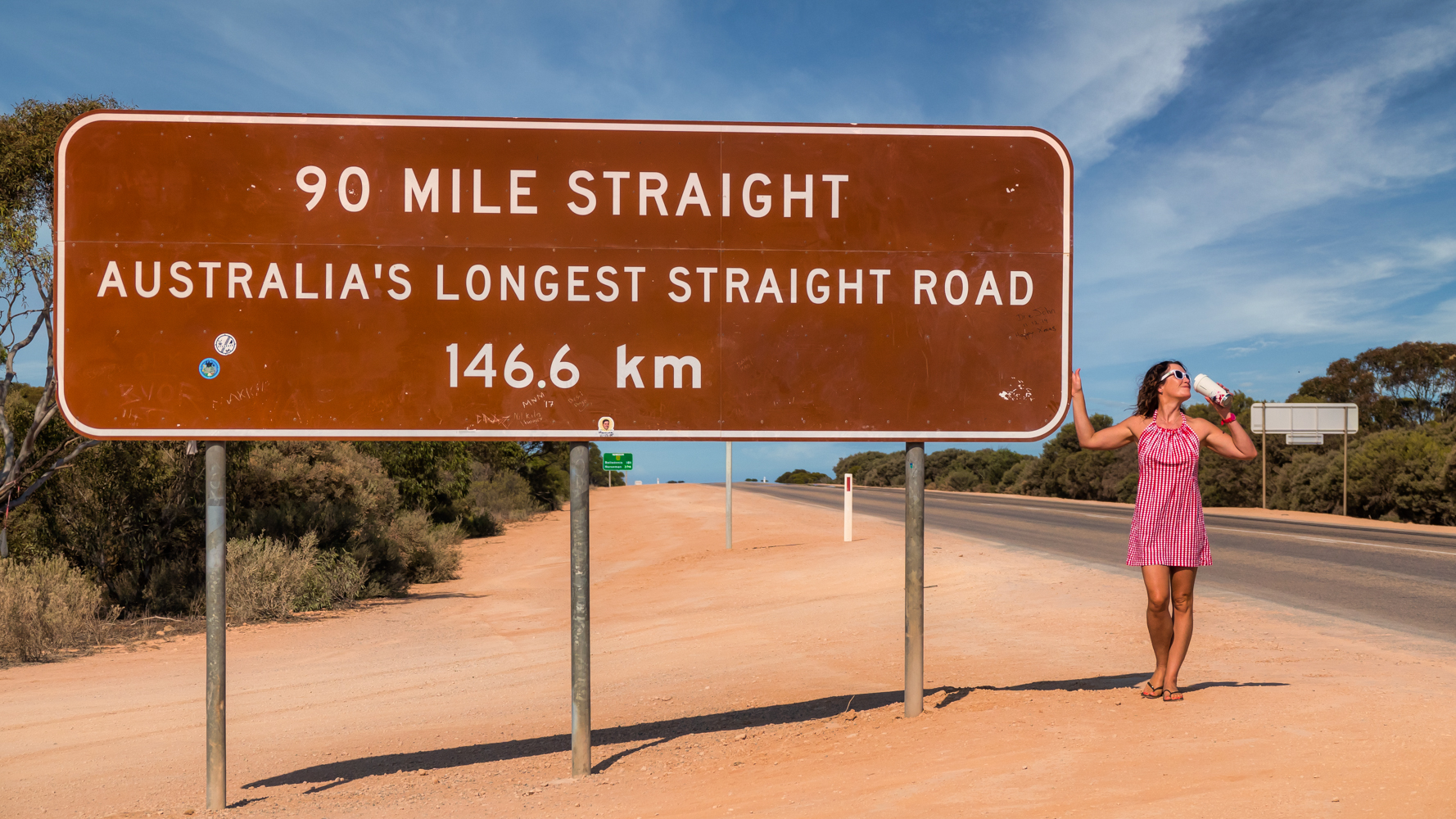 Do your research on diesel/petrol prices along this remote part of the trip. Two roadhouses encountered were 20c per litre higher than others. Use the PetrolSpy app (it needs internet..) and carry pre-filled jerry-cans for flexibility.

Should you see quantities of road-trains parked up at a Roadhouse, assume it’s “reasonably” priced!

Temperatures crept up again today. The gauge hit 50°C (122°F) somewhere near Eucla, and there was much excitement, whoop-whooping and photo-taking (a personal best for all) !! Despite much coaxing and cameras-a-ready however, the gauge did not reach 51. 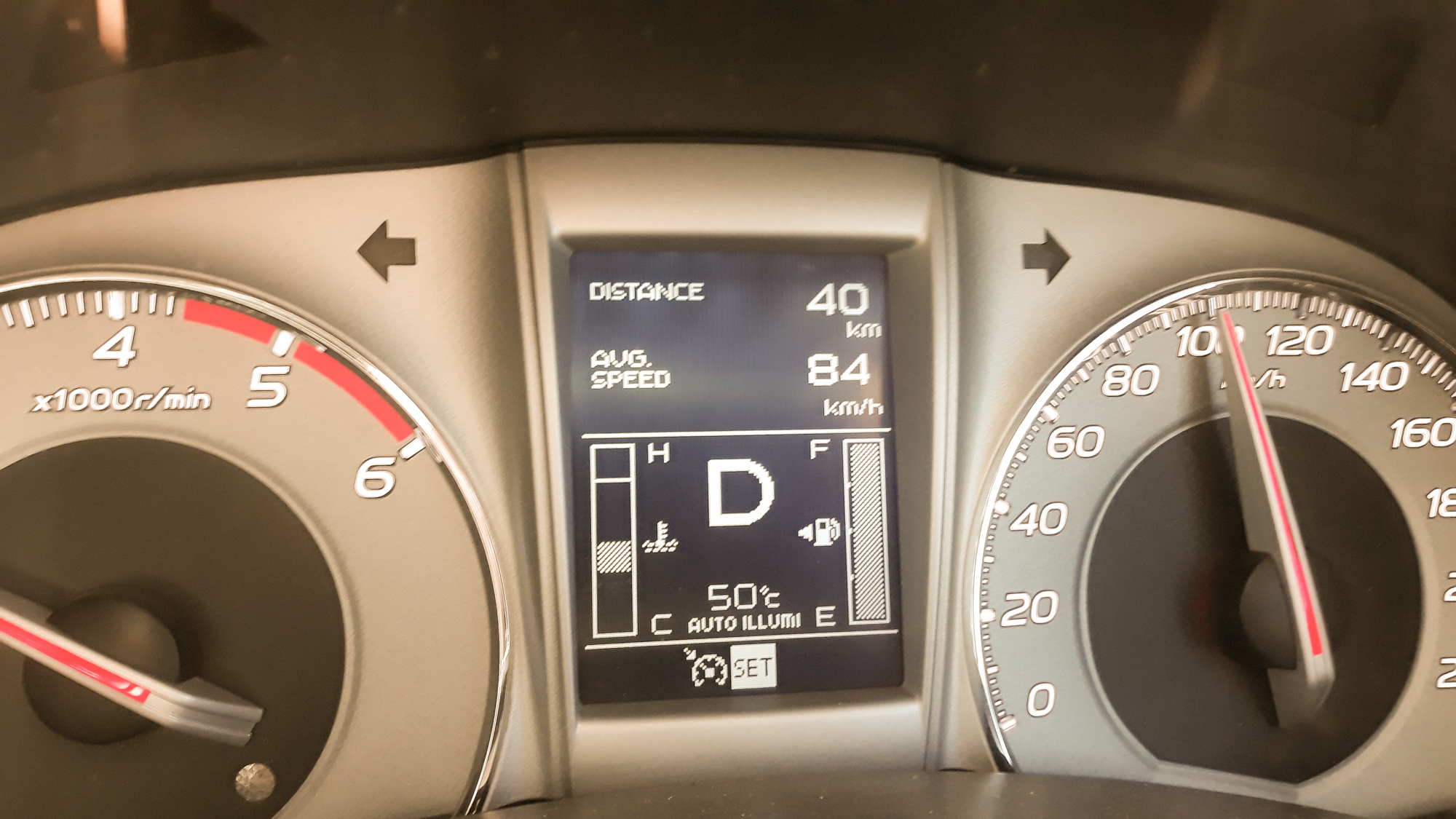 Umm photo taken by the passenger NOT the driver

MUXI-Anne passed through a unique and unofficial timezone - Eucla and the surrounding area, use the "Central Western Time Zone" of UTC+8:45. Although not officially sanctioned, it is universally observed in this area.

A stop along the Great Australian Bight is necessary to marvel at the view, and have a swim in those wild waters if you have the luxury of time. 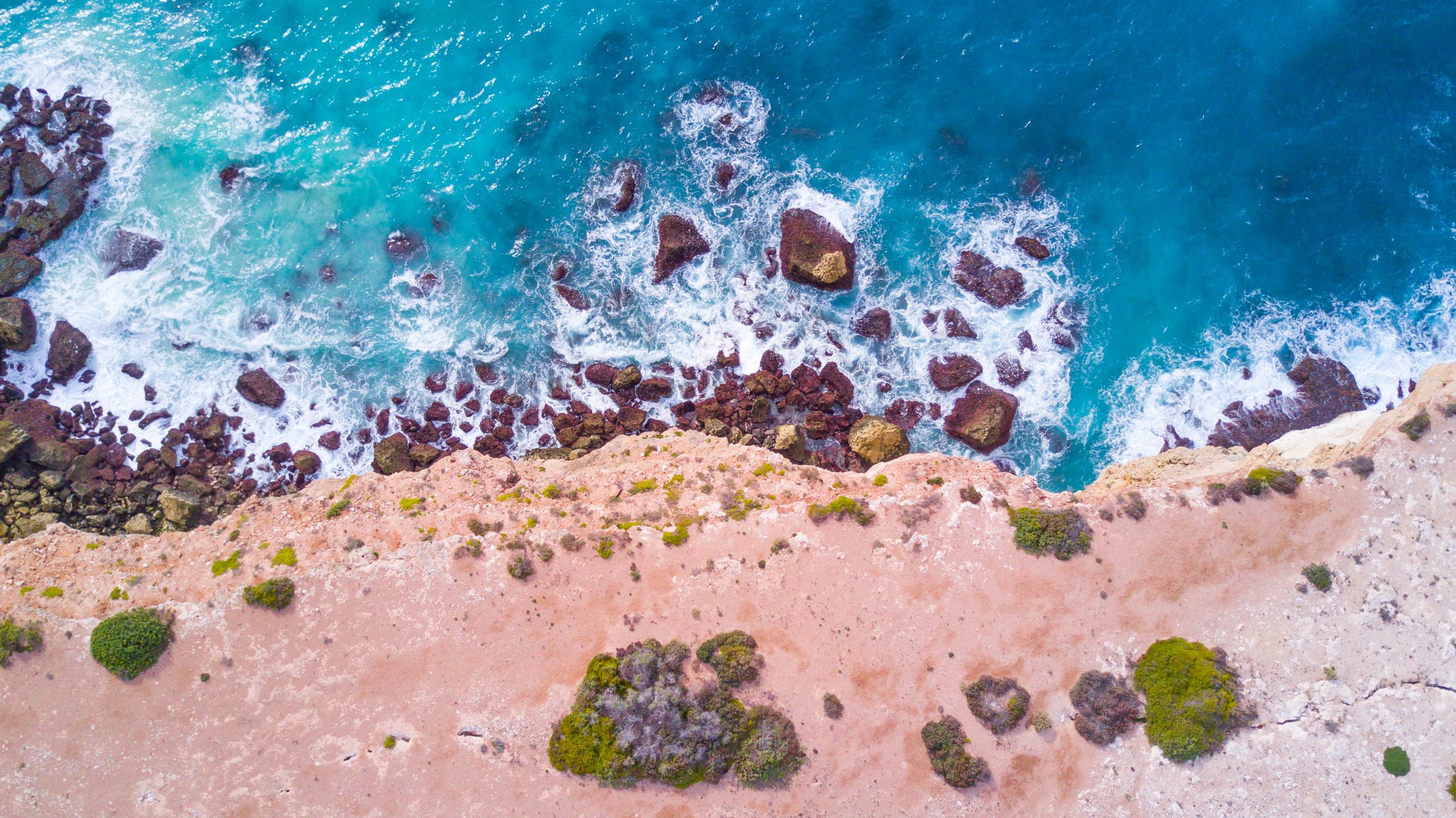 Aerial taken by Wags above the Bight. Research...as there ARE places where you can get down to the water...

A lone cyclist emerged in a fluorescent vest, sweating profusely, his dark legs exposed. Shocking, given the heat and the vast stretches of uninhabited highway. Hopefully he would stop at the next roadhouse, rest, and wait for cooler temperatures. A few days later - on Christmas day in fact - the news revealed the death of a 57 year old Queenslander cyclist, in an accident with a large truck near Nullarbor roadhouse. The distances stacked up. Was it him? 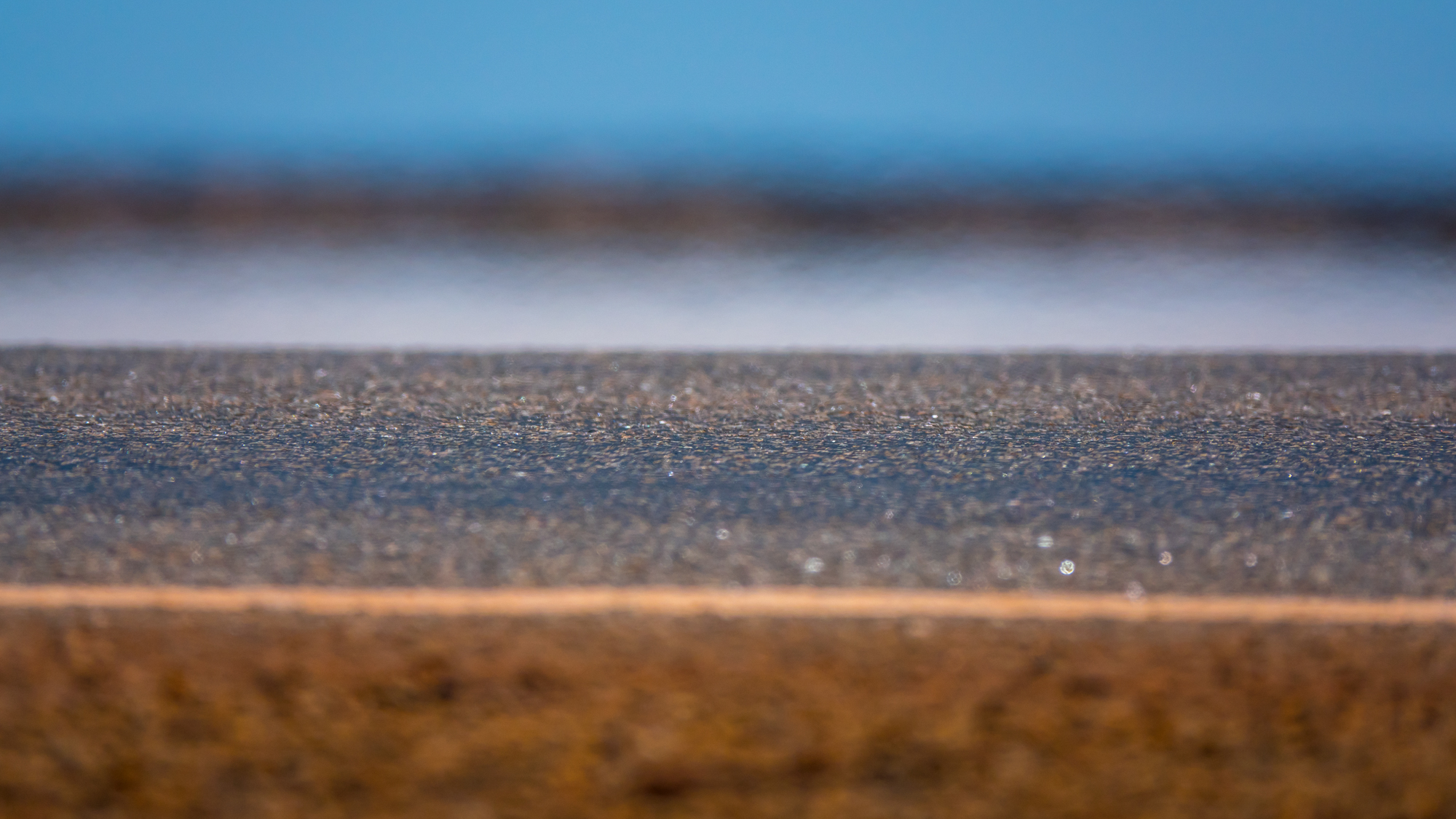 Setting up camp in 46°C isn’t fun, but there was no choice. Cool beers helped with the exhaustion (another item of precious cargo carried by MUXI-Anne in the tiny fridge). Not until 3am did a cool breeze waft through the flywire, finally drying the sweat pools on the mattress. 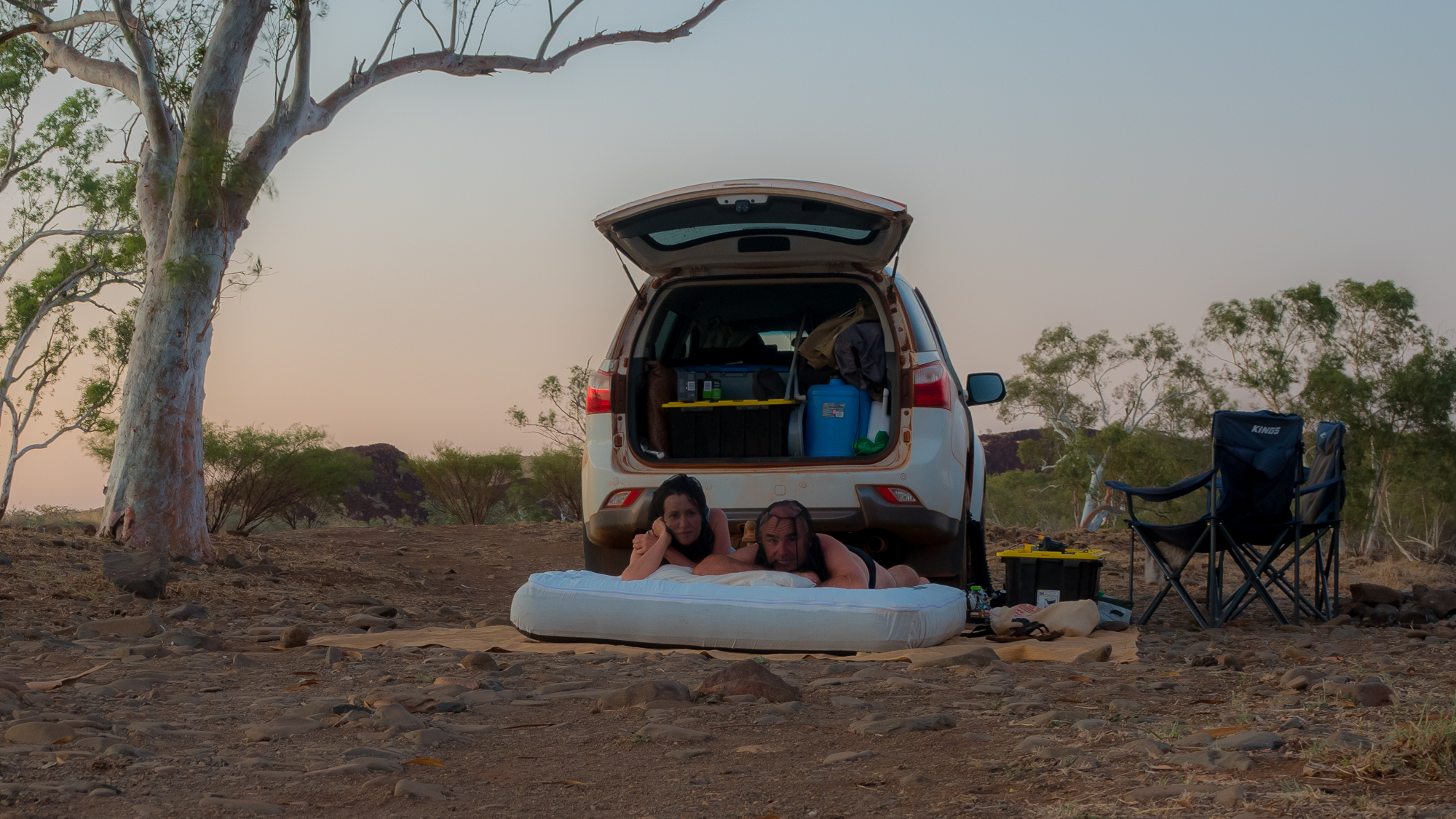 How we often cope with heat while waiting for the sun to drop....

Fancy a tee-off by a windmill? The cute town of Penong hosts dozens of windmills, which pump water from the Anjutabie water Basin. The town is also part of the Nullarbor Links Golf Course - the world’s longest golf course - with the first hole in Ceduna and the 18th hole at Kalgoorlie - 1365 km away!

The ocean scenes at the coastal town of Ceduna were welcoming. Ceduna is the gateway to the Western side of the Eyre Peninsula. If heading south, one would pass through the picturesque regions of Smoky Bay, Streaky Bay. Perhaps enjoying a sea-lion swim, a sharky surf, and some lovely fresh seafood. Then maybe also a cage swim with Great White Sharks off Port Lincoln. So tempting! 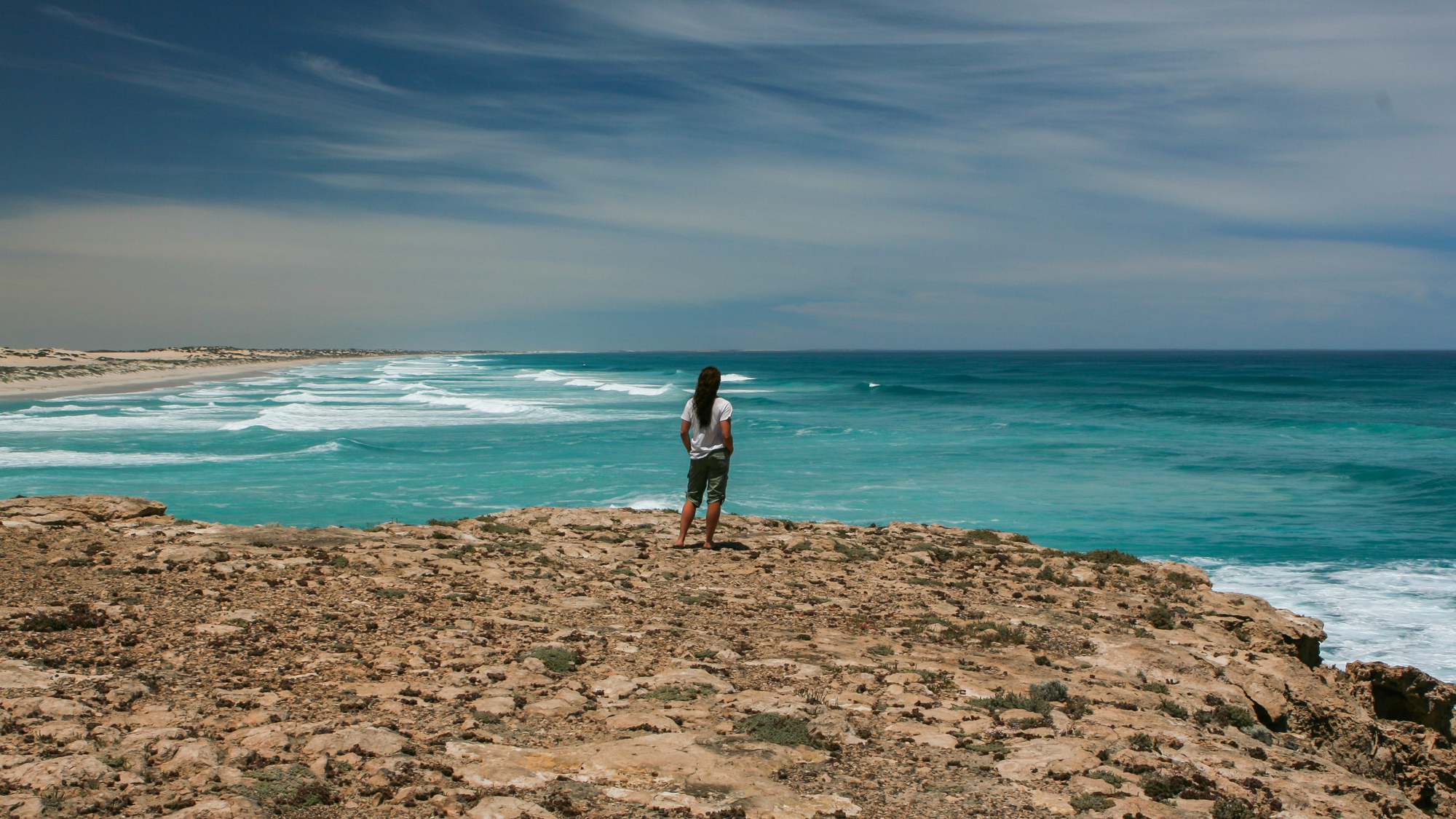 MUXI-Anne sacrificed such pleasures. Forging ahead east, she instead fought violent winds. Dirty yellow dust dominated the scene, rendering the sky a bleak tone of grey. Roads, fences and trees served only to add a darker contrast to the already monotonous, depressing scene, reminiscent of Armageddon in one’s own imagination

Kimba – the halfway point from West to East, offers points of touristy interest, and some super cool silo art. It’s part of the Australian Silo Art Trail. A stop is recommended, because the next trudge to Port Augusta is – frankly – boring! Fire up the music, or listen to an ebook. 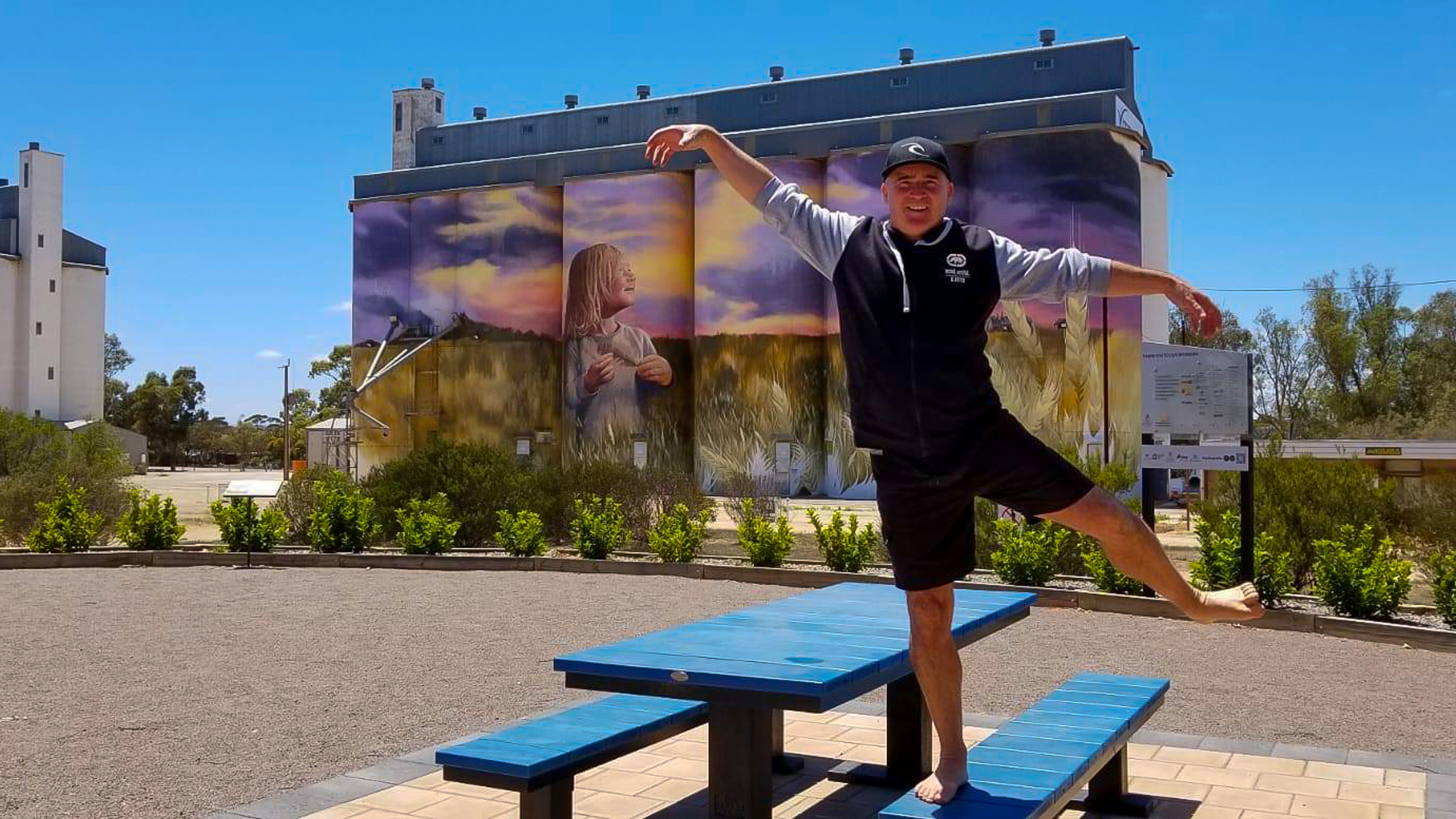 DO chat to others when you re-fuel … everyone has a cool story about their travels!

“I think I’ll turn around and go back home to Broome” said one traveller. “It’s cooler”. (Quite ironic, given the relative latitude of both towns!)

A $650M solar thermal plant planned for north of Port Augusta fell through in H1 2019. Solar thermal uses heliostats, or mirrors, to concentrate sunlight onto a tower that heats molten salt. The heat created is then used to generate steam. Despite financial/contractual backing by Federal and State Governments, the project was disappointingly scrapped due to lack of funding. You may notice a large Solar Tower heading heading south east from town. It once produced energy to power a large tomato growing operation.

MUXI-Anne was on the downhill run to Victoria now. More dark storm clouds promised heat relief and validated weather forecasts. However, a diesel stop at Morgan seemed to make a mockery of the forecast. “It never rains in Morgan” laughed the roadhouse operator as she took money to pay for diesel and those amazing burgers.

The Victorian had in fact salivated all day for the fish burger, having experienced the pleasure on a previous trip. Lettuce and mayonnaise flying everywhere, it was devoured within minutes of departing this dry town set on the wide green Murray River, a town full of dilapidated Santa ornaments strewn amongst dead plants. 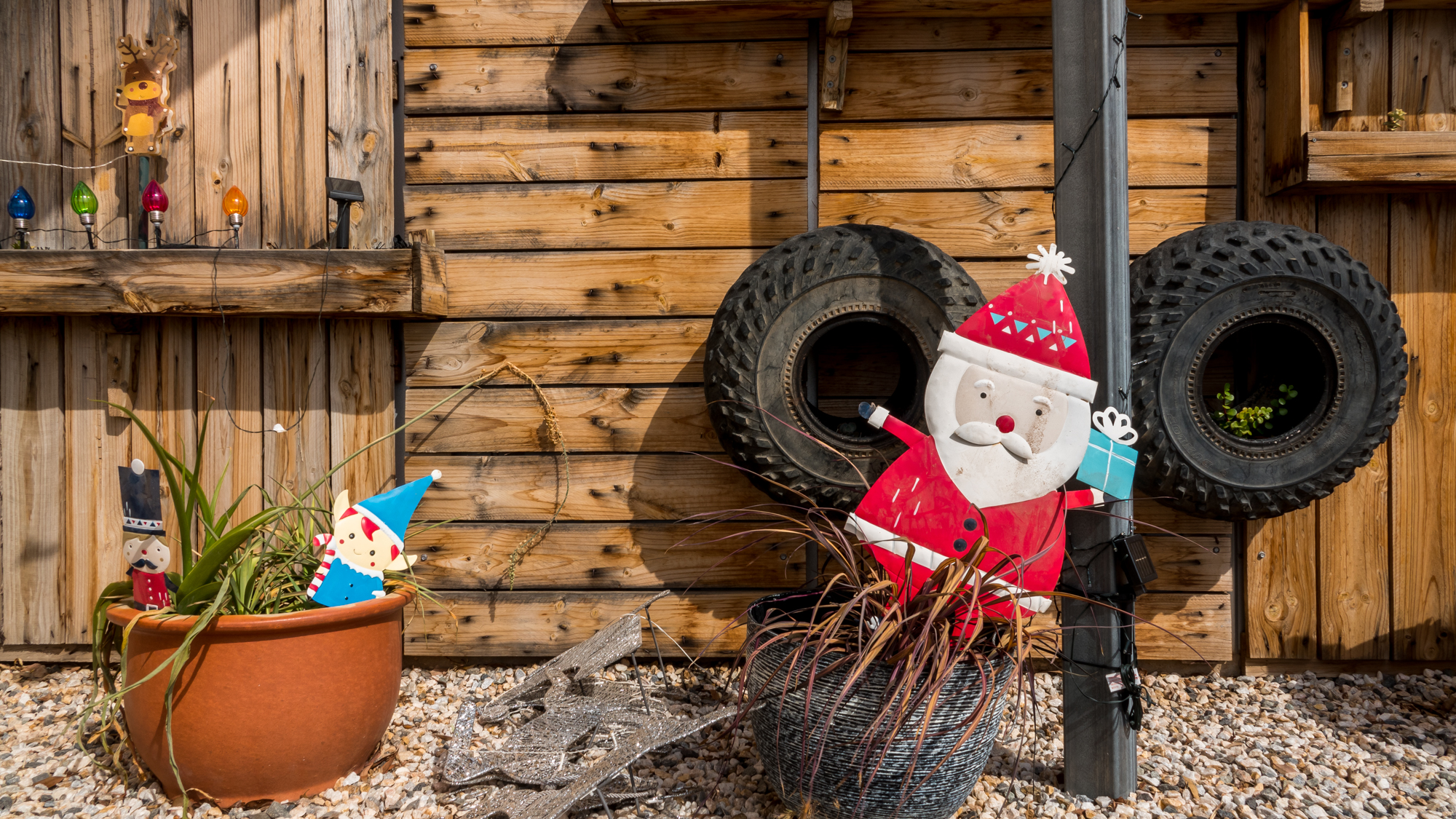 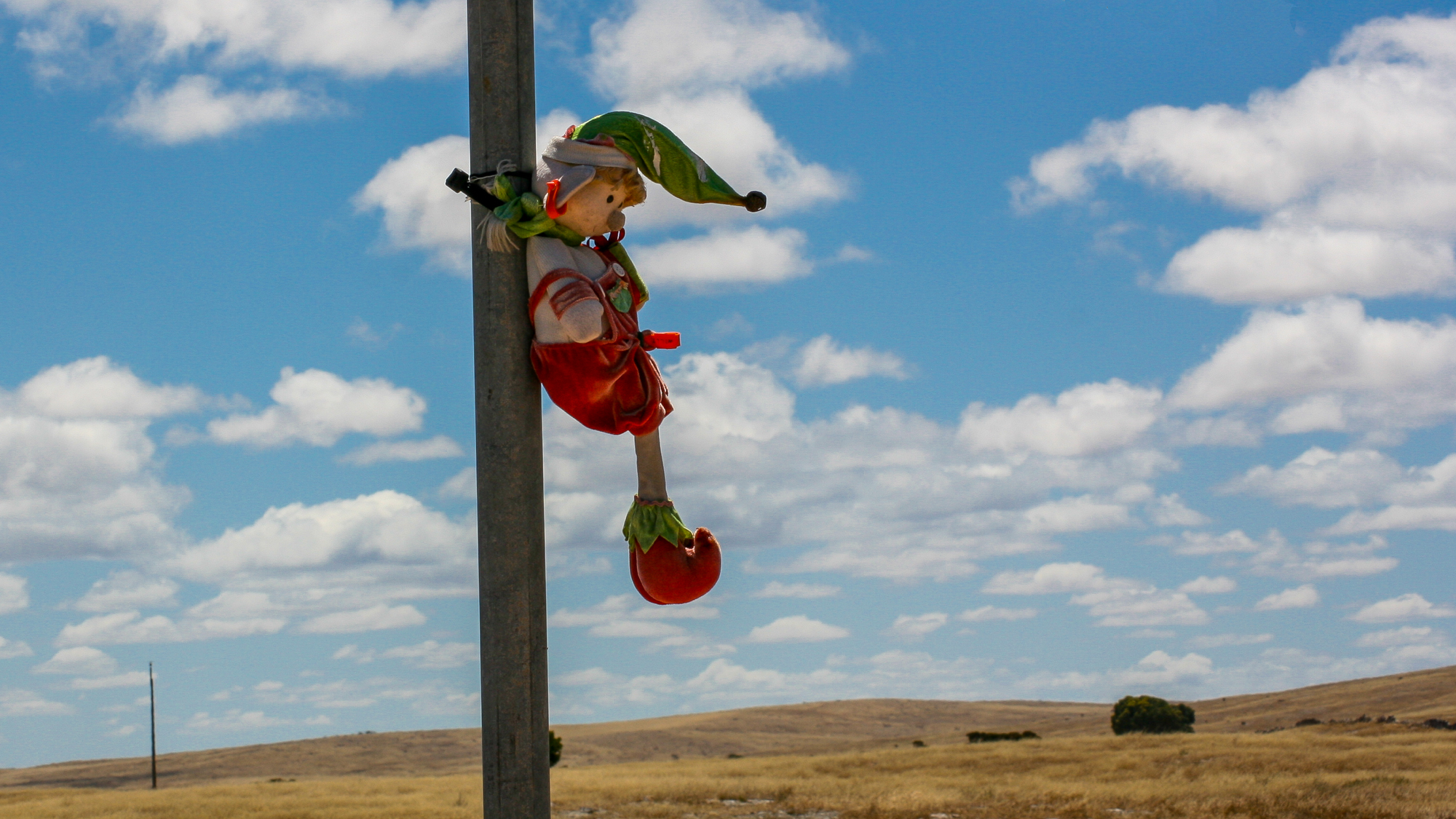 No rain, no snow, and no reindeer sleighs either! But great burgers - the Hawaiian burger is delicious too, both well priced at around 10 bucks each.

Travellers Note – if headed to Bordertown from Port Augusta, Google Maps will direct you along the A1 and A8, via Nantawarra and Gawler. But a quieter and more interesting route turns inland at Horrocks Pass Road, or Crystal Brook. Small towns, scenic hills, crop farms and far less traffic, and only marginally more kilometres. From Spalding, head via Burra to Morgan (for the burgers and fuel), then south to Loxton and Pinnaroo. Along this route, you may discover Ngarkat Conservation Park, with the Pertendi Hut campground being an option for camping.

Berri as the name suggests, is home to lush orange orchards irrigated from the mighty Murray River …. one feels as if they are passing through a family’s private property, so close are the orchards to the road. Indeed the Victorian has an extra affinity with this region on her Gap Year, having developed a taste for Berri’s camping-friendly 5L casks of wine !

It was in this region that more storm clouds, again promising rain, turned into a fast moving dust storm. MUXI-Anne managed to stay just out of it’s reach, as though James Bond were driving her, watching his pursuers in the rear mirror, Quantum Of Solace style.

The dust storm eventually and finally gave way to heavy rain, creating another whoop whoop moment as temperatures plummeted from 47°C to 24°C in just 12 minutes. MUXI-Anne pulled up stumps at a conservation park north of Pinnaroo, one of the many spots revealed by the trusty HEMA Maps. This app has continued to be a fantastic investment despite some of the negative feedback by the online community. 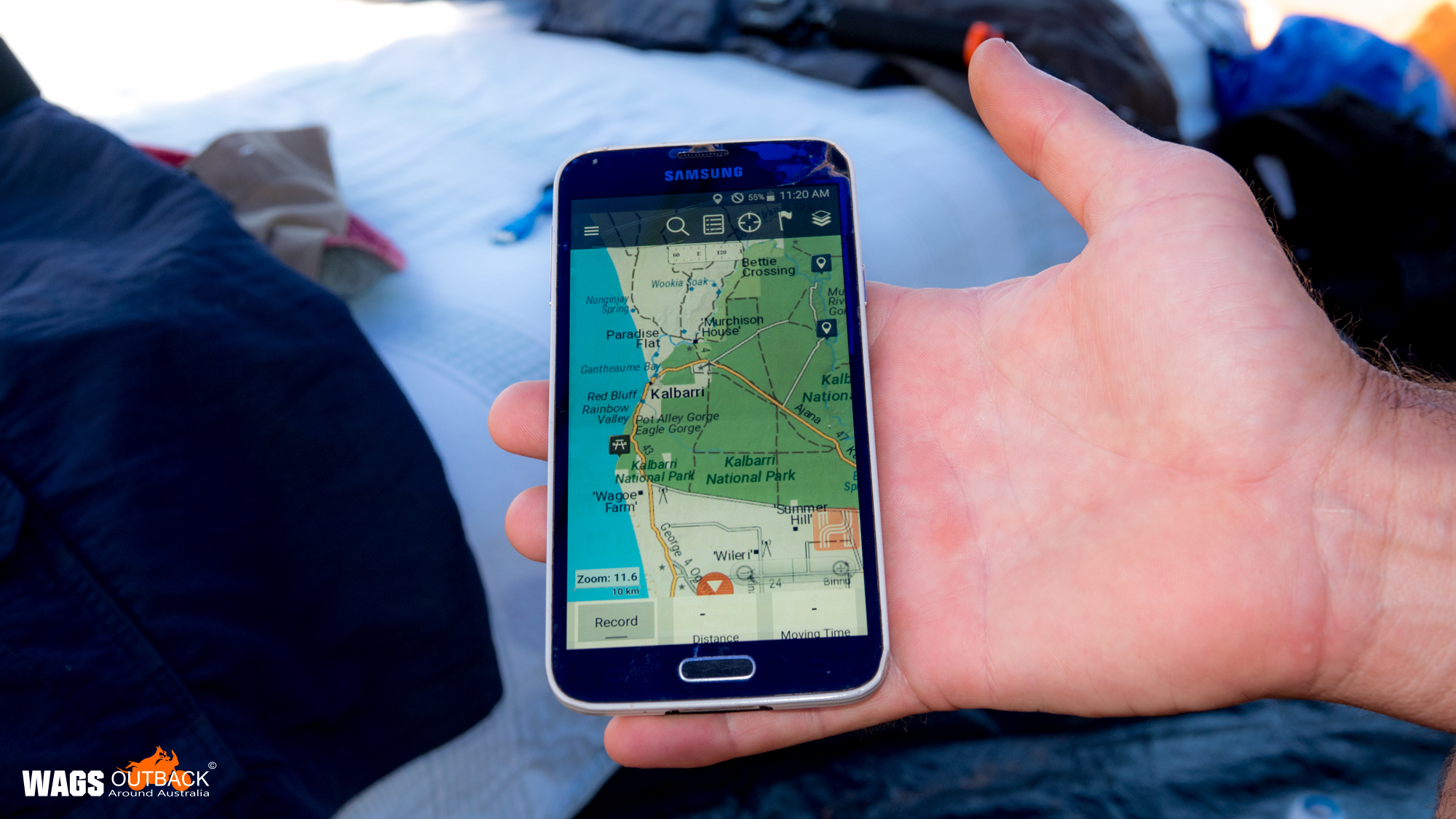 T’was a rush to setup the tent before further rain. Naked moments ensued, everyone hopeful for a good wash in the rain. Despite the impressive few hours of fork lightnings, the rain did no more than pollute car, trailer and body with large, dusty droplets. And so, the camp shower was begrudgingly retrieved. Silence then abounded as tired humans retired to the swag for their last night on the road. Silence broken only by whimperings of “I’m cold” just prior to the blanket being extracted from MUXI-Anne at 2am.

A balmy 19°C welcomed the final day of driving. Shortest by distance yes. But longest in kilometres covered per hour, given traffic, backroads and zig zagging required. The main highway from Adelaide to Melbourne is busy and frankly quite bumpy, so a route was chosen that zig zagged south east after Ararat, via Skipton and Cressy, to the surf coast where the Victorian lives. The road surface this way was actually smoother than the highway, albeit sometimes shrinking to a single-lane width of bitumen.

The wheat crop here was super thick, rather impressive compared to what Western Australia's wheatbelt had produced for the year. What a difference a wet winter makes. 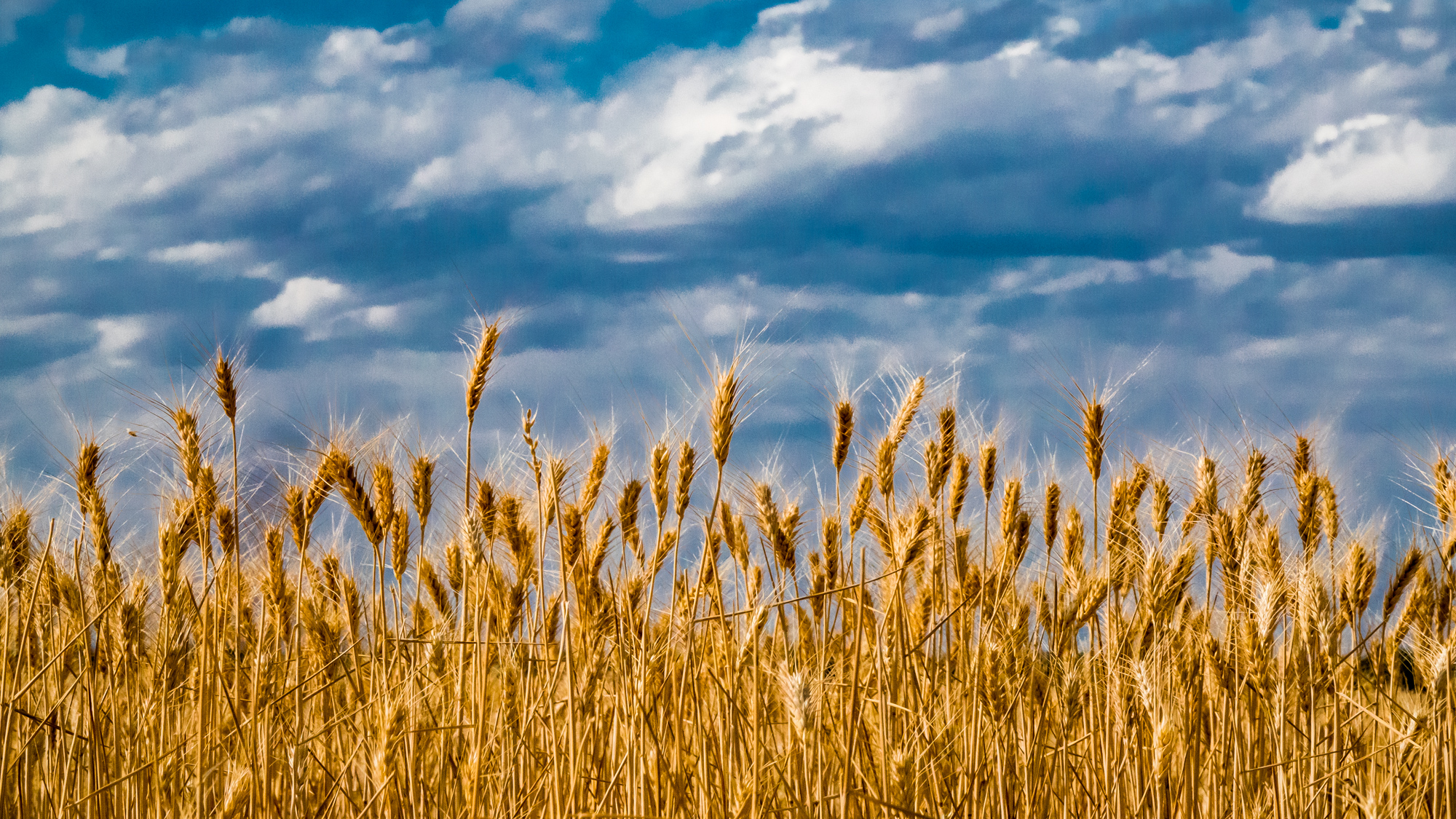 A wee argument between the occupants nearly caused an accident. Tired and grumpy, they could not agree on the best zig zag, and failed to see a GiveWay sign that loomed suddenly. Some quick acceleration did the trick, and a few minutes later, heads dropped slightly downwards in shame when the “other” car passed MUXI-Anne with some attitude! 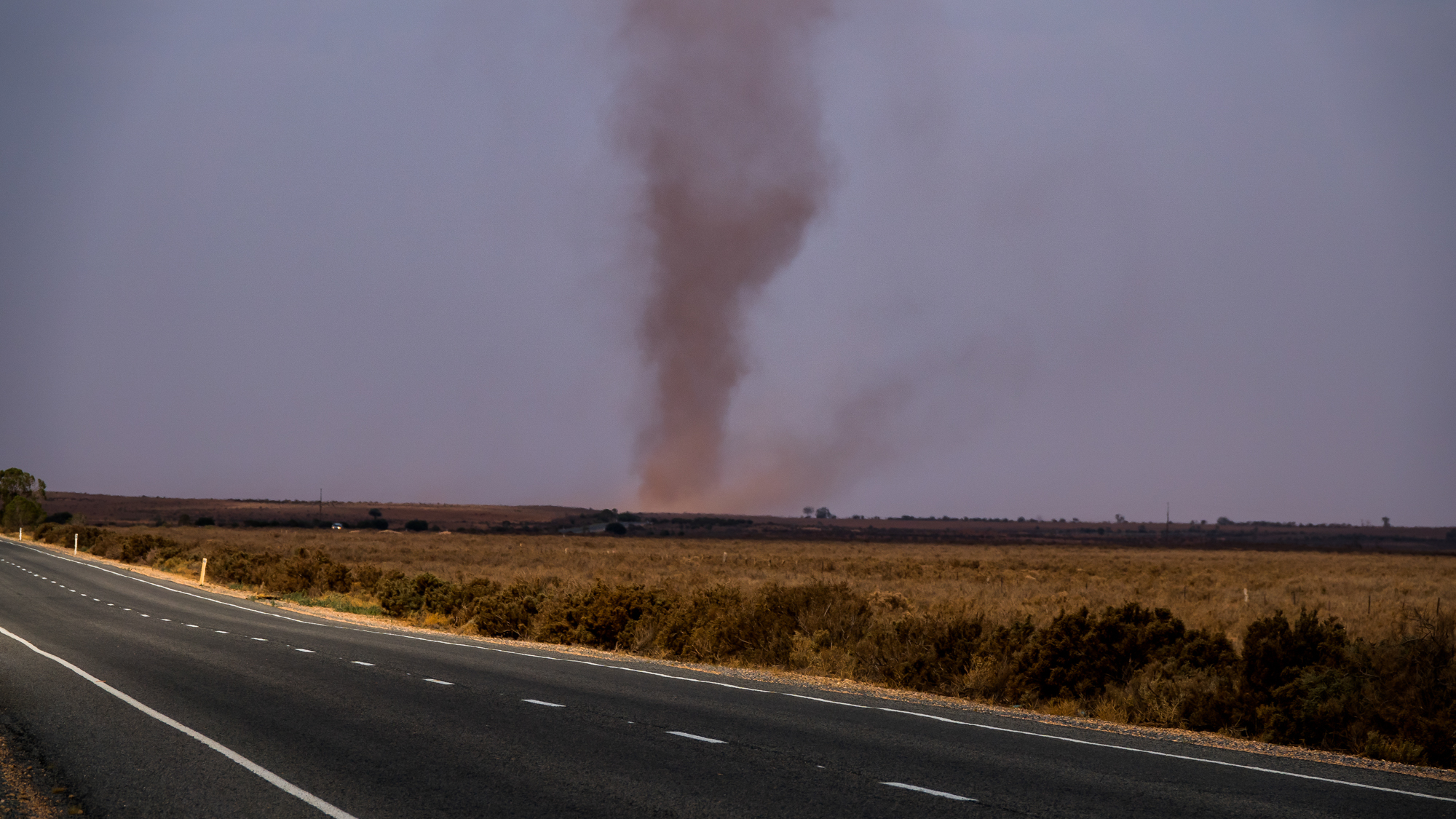 More time please! 2-3 weeks would be perfect to see many more sights along the way, but with MUXI-Anne diligently towing an entire life in that sweet box trailer, the scenic route will have to wait for another time. 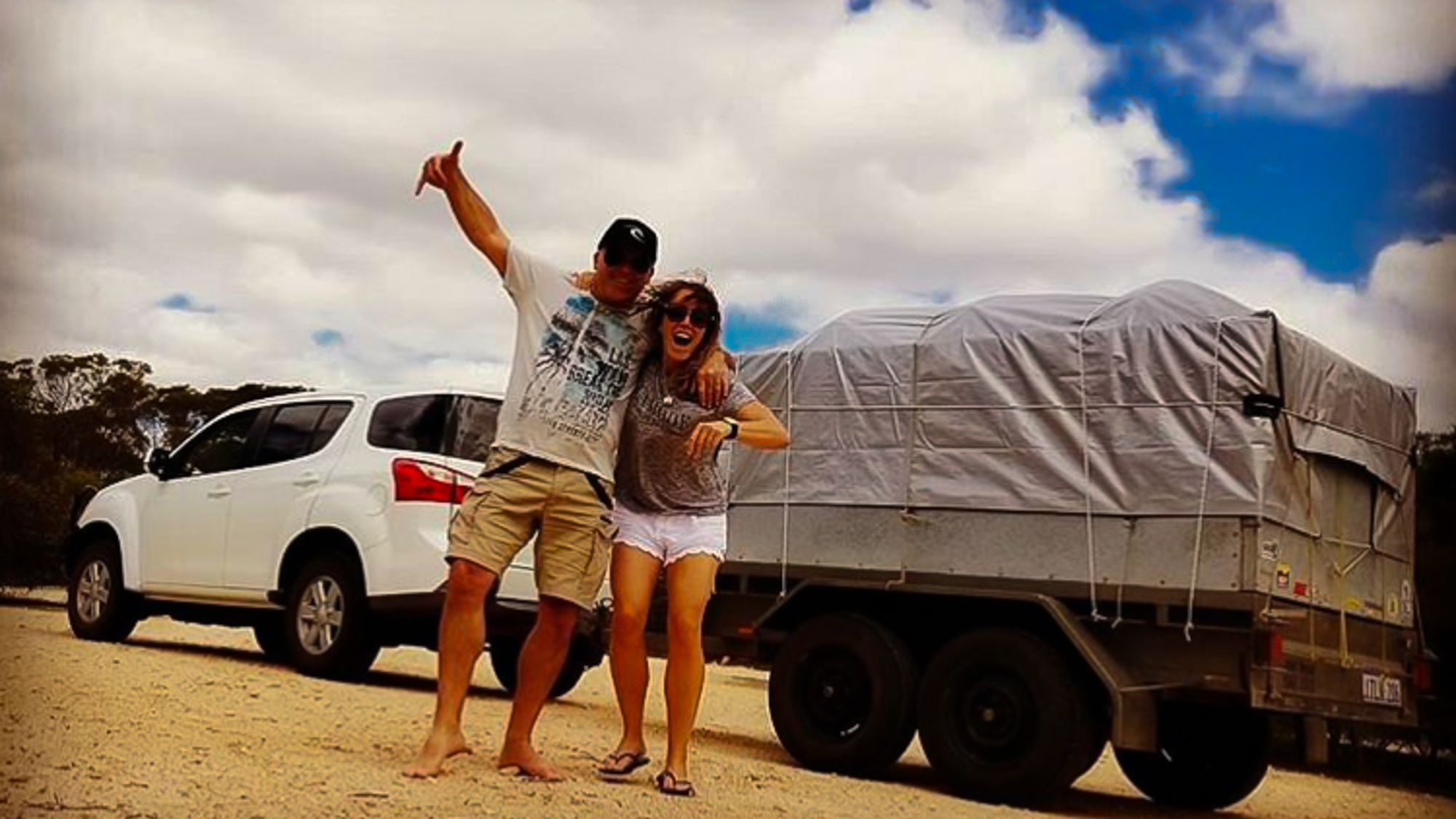 Welcome home to the Victorian. It’s cold, but it’s great to be here.